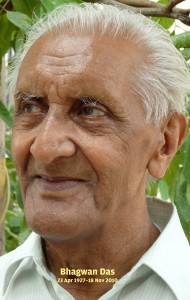 Bhagwan Das (1927–2010)  was an Ambedkarite and a historian of the dalit movement.  A meeting with Ambedkar in Shimla, in 1943, defined the trajectory of his life leading to his single-minded pursuit of Babasaheb’s ideals. He compiled four volumes of Ambedkar’s speeches of which the first, Thus Spoke Ambedkar, Vol. 1, has been published by Navayana. It has also been rendered in paperback as A Stake in the Nation. He is the author of In Pursuit of Ambedkar, a memoir.