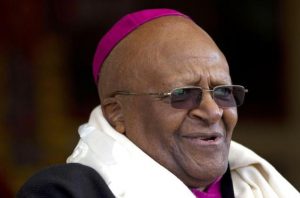 South African Nobel Peace Prize laureate and anti-apartheid campaigner Archbishop Desmond Tutu told The Hindu that he had not heard of Dr B.R. Ambedkar. He was pleasantly surprised when informed that Dr Ambedkar chaired the drafting committee of the Constitution of India.

Asked why African leaders fighting apartheid had not paid enough attention to him unlike Mahatma Gandhi, Archbishop Tutu said: “We were involved in our struggle against the racial injustices in South Africa, and you were looking for allies who would be able to help change your own set up. So obviously there was need to link up with those who had influence and power in their country.”

Time for Tutu to read up on Ambedkar. We suggest he starts with Bhimayana and Ambedkar’s World. More will follow.