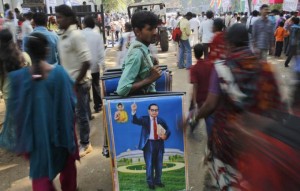 Namit Arora pays a rich tribute to Ambedkar and the growing respect for his legacy. The growth in the respect for Ambedkar is identified as proportionate to the growth in the relevance of his message, especially when compared to the conservative visions and dangerous, reactionary legacy of some of his contemporaries like Gandhi and Nehru.

Several Navayana publications are mentioned—Against the Madness of Manu, for the importance of reading Ambedkar from a variety of vantage points: social reform, academic research, issues of gender justice, the subaltern understanding of the Indian society etc., Ambedkar’s World, for still being the classic biography of Ambedkar, and Bhimayana, for being an important milestone of a growing movement to popularise Ambedkar—as part of this new recognition by Indian society at large of Ambedkar as not only  “the greatest Indian” after Gandhi but, perhaps, the greatest  of them all.