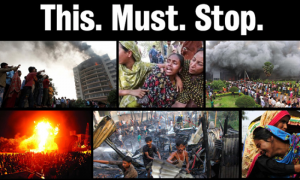 News like this put in context and explained angrily, beautifully, by Seabrook in his new Navayana book, coming soon.

An excerpt, very relevant here: “There had been no rise in the minimum wage for garment workers for four years between 2006 and 2010, in spite of the continuous increase in living costs. The announcement of a rise in the minimum from November 2010—from 1,682 taka to 5,000 ($20 to 60)—although apparently generous, was far behind the workers’ costs. In any case, many factories make unofficial fines and deductions from the official wage, as well as withhold bonuses and money for overtime. Sometimes long delays occur in payment for labour performed, and some garment establishments are three or even six months in arrears. The government promised subsidized rice for workers in the ready-made garment sector; but nothing happened. Garment workers quote a Bengali poem, ‘Chailam ek ghoti jol, Dilo adkhana bel’—I asked only for a drop of water and you gave me dry fruit. That’s how they feel.”