That global capital constantly shifts its sites of exploitation is common knowledge, but the wide-reaching consequences of such an imperative are often overlooked.

1100 lives is perhaps what it takes to prompt a spark of affirmative action. More than 150 international retailers signed the Bangladesh accord on fire and building safety following the Rana Plaza building collapse, notwithstanding the fact that it covers only garment factories in Bangladesh, and focuses only on aspects of safety. What of other labour rights issues in Bangladesh, or blatant violations in many other countries that are part of the global garment supply chain such as Pakistan, China, Cambodia and India? 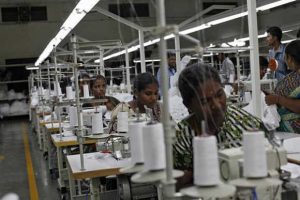 Flawed fabrics, a report by the Centre for Research on Multinational Corporations (Somo) and the India Committee of the Netherlands (ICN), shows that in spinning mills in Tamil Nadu, in south India, teenage girls and young women are working under conditions that amount to slavery and the worst forms of child labour.

The mills supply a number of well-known European and US brands and retailers. Two of the five mills export yarn and fabrics to garment factories in Bangladesh that are covered by the accord.

One hundred and fifty workers from five spinning mills were interviewed for the report, which reveals that girls as young as 15 are being recruited from marginalised Dalit communities in impoverished rural areas in India. They are lured with promises of decent jobs, good wages and a lump-sum payment. But the reality is a 68-hour working week, poverty wages, no contracts or payslips, and being locked inside factory and dormitory compounds during working and non-working hours

Will the market become cosmos, leaving no alternative, no culture, no civilization, no other way of living outside of its constantly expanding frontiers?—we ask along with Seabrook.