The Half-Life of Caste 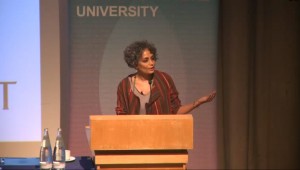 On 20 November 2014, Arundhati Roy delivered the Lancet Lecture in London hosted by the University College, London: “The Half-Life of Caste: The Ill-Health of a Nation”. She jokes about how she may have pulled off a little scam with the word “ill-health” in the title, leading people to believe that the lecture was a “medical” thesis. Paradoxically, she debunks more than one myth that people have been scammed into believing. The most topical and hallucinatory one is at the present being proselytized by Prime Minister Narendra Modi—the Swacch Bharat Abhiyan (Clean India Campaign). Talking of the apathy that caste Hindus and the rest of India has towards the “vulnerable” communities, Roy says, they are the ones who are most affected by the present “crisis in public health”.

But that is not all; the systemic violence wrought by the caste structure further hampers a Dalit. She says how health officers in government hospitals may not treat a Dalit because touching the person could well mean getting “polluted”. In such a nation, Modi and other officials posturing to take up a broom and sweep the streets can only be a facetious performance, especially since the task is otherwise performed almost exclusively by the Dalits of India.

Roy then goes on to “tell the story of caste in India” contributing to the dialectical opposition between the philosophies of Ambedkar and Gandhi, the “doctor” and the “saint”. Ambedkar, the doctor, was the ‘Untouchable Mahar’ who took the route of Western liberalism and Buddhism to escape the coercive caste-based structure of Hindu society, and he used the tools of these and the tradition of anticaste thinkers of the subcontinent to fight a nation inured to caste. Ambedkar found his biggest adversary in Gandhi, the “saint”, who had literally taken upon himself the task of representing the Dalits, superciliously christening them “Harijans” or “children of god”.

Roy, in her lecture, shreds the mask of the “saint” saying how he had “consistently” tried to distance himself from Black Africans and Dalits, hiding his own prejudice behind the rhetoric of “integrating the nation”. She describes how Gandhi had dragooned Ambedkar into signing the Poona Pact, where the latter had to compromise on separate electorates for reserved constituencies.

Her critique shows how Gandhi himself was quite conscious of his caste and found admirers among his Bania kinsmen—such as Birlas. She says that Gandhi’s unease and later noncooperation with the British in South Africa primarily owed to the fact that the British had tried to equate the caste Hindus, of whom many were Banias, with the ‘Kaffirs’ (as Gandhi was wont to call Black Africans in a derogatory fashion). He was equally condescending of Dalits. He had once suggested to a Christian missionary, how he must not preach Christianity to ‘Untouchables’ as it would be equal to “preaching the Gospel to a cow”. She shows how Dr Ambedkar’s writings offer a critique of this prejudice and constitute a pioneering effort to give power back to Dalits. 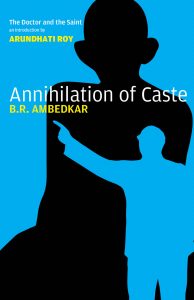 Roy’s lecture—which can be viewed in full here—was received with much enthusiasm and was followed by an interesting discussion. Someone in the audience pointed out how the word caste was now being replaced by other words such as “social origins” and asked if it was to make the term and issue more “palatable”. Roy replied in the affirmative and says that caste issues were forefronted only during elections; else they got “invisibilized”. She also said, “The first heist is the language heist—the first thing they steal is a language in which you can describe what’s happening to you.” Dr Ambedkar’s Annihilation of Caste re-appropriates language and for good measure he debunks and dismantles a system and philosophy that not only robbed people of their voices but their most basic human entitlements.

Much of Roy’s speech is actually contained in her substantive introduction to the annotated, critical edition of Annihilation of Caste published earlier this year in India. Roy’s Lancet Lecture will be followed on 24 November by a panel discussion at the Southbank Centre in which Santosh Dass of FABO and Tariq Ali of Verso Books will also be speaking.

And if you have not already ordered a copy of the annotated Annihilation of Caste, do so now!