The Food on Our Plate 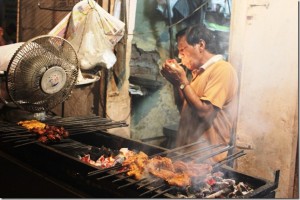 India has managed to perpetuate many myths: one of them is that most Indians are vegetarian. Surveys have proved that at leas 60 percent of people in this country are meat-eaters. According to one report, in 2012, “India became the world’s No. 1 beef exporter, beating out such perennial beef powerhouses Australia and New Zealand.”

In India, inevitably, Brahmin men have decided policy in this realm for decades. So what constitutes RDA—Recommended Dietary Allowances—has been decided by ‘scientists’ like C. Gopalan, V.M. Dandekar, Nilakanth Rath and M.S. Swaminathan, says Veena Shatrugna, former nutritionist with the National Institute of Nutrition, Hyderabad. Shatrugna, who has for over three decades worked on issues of nutrition and health, believes that the state’s RDA is oblivious to the ‘calorie needs’ of the poor and imposes a ‘cereal overload’ without any meat, indicating an evident Brahminical streak in their approach.

In an interview to Down to Earth magazine, Shatrugna says the food culture of the poor includes a variety of meats such as rabbits, tortoise, beef, birds and pork, and other berries, tubers and eggs which have been conveniently ignored by people who decide RDA. Instead, those who decide RDA are ‘practicing upper caste nutritional science’ by prescribing cereals and more cereals as part of a ‘balanced diet’ while completely missing out on diverse local foods. The irony is that the magazine that carries Shatrugna’s interview, run by the Centre for Science and Environment, recently published a cook book that promotes vegetarian recipes. Just like The Hindu that bothers to publish articles like “The Meat of the Matter” does not allow even egg in its office canteen in Chennai. The Hindu also happily reported how lawyers in Madurai had demanded non-veg food in ‘canteens functioning in various court campuses across’ Tamil Nadu, while maintaining a veil of secrecy over its own practice of food apartheid.

It is also not so easy to regard vegetarianism as brahminical. After all, as B.R. Ambedkar had argued, for the Vedic Brahmin ‘every day was a beef-steak day’. D.N. Jha, in his book The Myth of the Holy Cow, has documented how widely beef was consumed in ancient India. For how even beef looks benign, you could read an N.D. Rajkumar poem—translated by Anushiya Ramaswamy. Perhaps you could buy a copy of Give Us This Day a Feast of Flesh this Christmas and indeed have a feast of flesh. 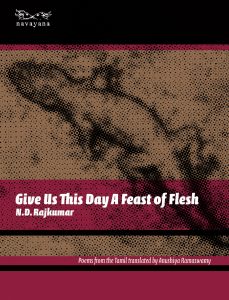 We eat frogs to calm

To cure the fit

And eat it happily

Give the baby boiled fish eggs

To grow nice and fat

We split the nei fish

And drink its oil

We fuck the devil

While our blood runs

We are as hard as

Juiced through the sieve

We capture the devil

In the cage of our hearts

Mixed with chunks of palm nectar

We keep the spine from collapsing

Soup drunk as if it is

Made from the leg bones

Cooked in a clay pot

Over a small fire

Until a sauce is

Brought to us by a

It urges us to labour

To plunge the lingam

Into the black lips

Of the conch shell

The pork fat that cures

Soup brought by the Araki

While we eat this food

As medicine and offerings to our Gods

And beef for Sunday dinner