Some Firsts About the First People 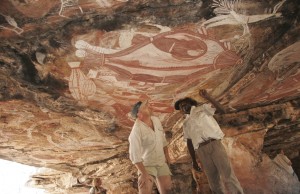 At Navayana, as we publish two important works by two Indigenous Australian women writers—Alexis Wright and Ali Cobby Eckermann—it is time to state some first things first. The First People of Australia are best referred to as “Aboriginal and Torres Strait Islander people” or “Indigenous people” or “Indigenous Australians”. The generic, colonial term “Aborigines” is not just uncool but boorish—for we are talking here about people who belong to the oldest surviving culture in the world, more than 60,000 years old. And they don’t just live in the bush—the highest proportion of Indigenous Australians lives in Sydney.

Indigenous Australians are believed to be among the earliest human migrants from Africa who settled in Australia over 60,000 years before Captain James Cook arrived at Botany Bay on the Endeavour (1770). There was great diversity amongst the indigenous population with as many as 700 language groups with varied cultures. They had virtually no contact with the outside world, and were suddenly confronted with a hostile alien force when the British established their dominion after 1788. They declared Australia to be terra nullius—‘land belonging to no one’—completely effacing the presence of an entire people. Thus Australia came to be the The Stolen Land. For a graphic and engaging overview of history that seems to begin before time, spend some time on this site. 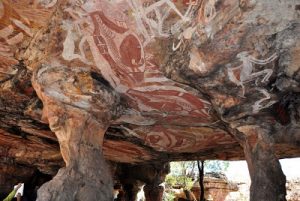 Unlike the rest of the world, Australia’s Indigenous civilization did not go through an “iron age” or “bronze age” but traced a different trajectory of stone technology. It is one of the oldest surviving cultures, where some of the oldest paintings of red ochre pigment and stone tools come from. Expression in art forms an unwritten encyclopedia, using traditional icons (symbols) in stories, dance and song. Their Dreamtime paintings helped to hand down vital knowledge over millennia.

Dreamtime is a loose translation of a rich concept. It is the veil separating physical life from existing life, the collective wisdom of ancestors is absorbed into a dynamic ‘resource bank’, passed on in death. It is believed that the ancestors of the Indigenous people metamorphose into nature, such as rocks or rivers, where they remain spiritually alive. It is more than just a mythical past that establishes the spiritual essence of everything around and beyond them. Dreaming stories are not in the past, they are outside of time—always present and giving meaning to all aspects of life. Every moment contains an eternity of possibilities. While some say that “English can never capture what ‘Dreaming’ or ‘Dreamtime’ is all about”, Alexis Wright’s epic novel Carpentaria will enable you to experience Dreamtime—in English.

Genocidal practices against the indigenous were adopted as a policy by the state dating back to the British settlements. ‘Aborigines’ were considered ‘wild animals’, ‘hideous to humanity’, and a ‘nuisance’, who had to be eliminated and were fair game for white ‘sportsmen’. They were hunted down, shot, poisoned through issue of rationed flour, and confined to the harshest and most desolate terrains. No one has opposed the eminent economic historian Professor Noel Butlin’s hypothesis that Indigenous Australians were deliberately exposed to small pox which proved to be the single most effective killer of Aboriginal and Torres Strait Islander people leading to their near extinction within 123 years, with numbers falling from 250,000 to less than 31,000 people.

As part of the UN Convention on the Prevention and Punishment of the Crime of Genocide of 1948, a sub-section of Article II states “forcible transfer of children from one group to another” as a genocidal act. This is precisely what happened in Australia between 1909 to the early 1970s where children from Indigenous families were abducted by the state and sent to institutions or white foster homes in the name of ‘child protection’. This phrase was coined by the historian Peter Read in his article in 1981, after which awareness about this phenomenon spread. Almost every family in the Indigenous community has been affected by this policy, the main objective of which was supposed to be racial assimilation. The social impact of these forced removals was severe with children being wrenched from their families. Bob Randall’s song “Brown Skin baby”went on to become the anthem for the children of the Stolen generation.

Ali Cobby Eckermann’s powerful memoir Too Afraid to Cry helps us see life after abduction—and shows us how suffering can be transformed into a work of art. 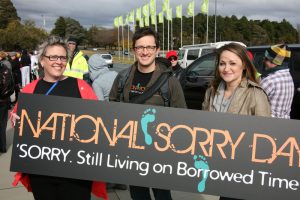 National Sorry Day is an annual event held on 26 May to commemorate the injustices meted out by the state on the Aboriginal and Torres Strait Islander people, especially the children of the Stolen Generation. In 1997, the Bringing Them Home report was tabled in the Australian parliament but it was only in 2008 that Prime Minister Kevin Rudd moved a motion of Apology to the Indigenous Australian “Stolen Generation”. (Since we are a country that does not believe in apologizing, look here for a comparative list of other such apologies extended by various state governments ) This may be viewed as the first few steps of the state in acknowledging their gross injustices.

However, as John Pilger points out, in the wake of the 2000 Sydney Olympics, the First Australian athlete Cathy Freeman’s broad billboard smile was used just as vehicle for the state–corporate responsibility. For a sorry history of this Apology, go here.

In the early 1980s, apart from new histories being written, documentaries and films came to be made fuelling awareness about the Stolen Generation. One of the earliest documentaries, Alec Morgan’s Lousy Little Sixpence (1983), gathered many accolades. In 2002, the feature film Rabbit-Proof Fence based on the book Follow the Rabbit-Proof Fence by Doris Pilkington Garimara, swept the awards. It is based on the true life of the author’s mother and two other mixed-race girls who follow the rabbit-proof fence (a massive pest-exclusion fence erected by the state) while being chased, back to their native community. 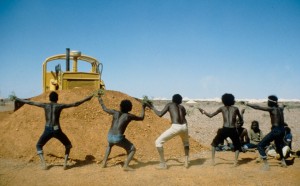 A still from Herzog’s Where the Green Ants Dream.

There’s of course the classic Werner Herzog film, Where the Green Ants Dream (1984), about a land feud between a mining company and the First Australians—a subject powerfully dealt with in Wright’s Carpentaria. The first ever film that was made entirely in the dialects of Yolŋu Matha, a native language group, was Ten Canoes, dealing with love and women in the community. Another historical documentary, First Australians, was produced in 2008 charting the trajectory of history from the perspective of the Indigenous people. Other acclaimed films include Samson and Delilah, Bran Nue Dae and the 2013 release Mystery Road that made it to the Toronto International Film Festival. 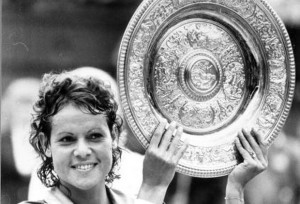 Cathy Freeman may be the most famous First Australian sportsperson, but we forget that the first people, despite the worst forms of apartheid and an unlevel playing field, have had a longer history of triumphing in sport. You may recall Evonne Goolagong (Cawley)—the tennis star who won Wimbledon in 1971 and 1980, and bagged 14 Grand Slam titles in all. There is also the story of the first First Australian first-class cricketer, the explosive right-hand fast bowler, Murrumgunarrimin (known as Twopenny and also Jarrawuk). During a first-class tour to England as part of an Australian Aboriginal cricket team in 1868, Murrumgunarrimin took 35 wickets at an average of 6.9 from 704 balls bowled—and of course they called him a chucker. Once, in a Sheffield match, he is said to have hit the ball so far and high that the batsmen were able to run nine runs (with no overthrows). To know more about Indigenous cricketers and those who excelled in other sport, see here. You could also let Pilger walk you through some famous First Australian sporting icons.