Get your ears out of your pockets: Ali

Ali—lessons in how to sit in the sand, soak in the sun

On Sunday, a day after Ali Cobby Eckermann delivered the Navayana Annual Lecture in Delhi, she met Meena Menon of The Hindu over a long lunch, catching the reluctant winter sun in Khan Market over wine and cigarettes. Ali spoke at length to Meena about how people belong to the land, and how land can never belong to people—something that the Abbots, Modis and mining corporations will never understand. She spoke about how, in the 1970s, her grandmothers joined hands to simply kick a mining project out of their traditional lands. The interview-based report in The Hindu tells us all about how the Indo–Australian nuclear deal signed last year could well spell disaster for Australia’s First People, as Ali speaks about her nation’s legacy of deceit and betrayals, and also the rare victory:

Many had lost their family in the nuclear fallout and for these women, it was an environmental war- and a cultural war and they were so dignified in their protest… I don’t know how they did it. They said never raise your voice except to sing traditional songs and they told the government to “get your ears out of your pockets.”

The conviviality between two right-wingers, Abbot and Modi, led to the sealing of Indo–Australian nuclear deal which was in the making for years. This deal translates into India seeking uranium from Australia to operate its 21 nuclear reactors that do not meet even the minimal standard of international safety norms. After all, Australia has 31 per cent of the world’s uranium reserves, and most of them are on Indigenous people’s lands. This deal gives an impetus to mining corporations to further explore mining in Indigenous lands of Australia’s in Western Australia: in 2008, it was reported that “Perth RIL Australia, a subsidiary of Reliance Industries Ltd, has paid $3.45 million in cash to Uranium Exploration Australia Ltd (UXA) to acquire 49 per cent interest in four of the latter’s exploration licences in South Australia.” The Indian state, too, has sought to mine the uranium in Adivasi lands in the subcontinent but their efforts have been foiled by protests: by the Khasis of Domiasiat, Meghalaya, and the Lambadas of Lambapur-Peddagattu in Nalgonda, in today’s Telangana. 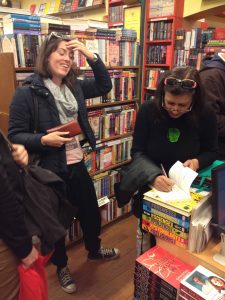 Meena Menon reports that protests are continuing in various parts of Australia over mining uranium and minerals, and even the Kakadu National Park, a UNESCO World Heritage Site, is under threat. “Uranium from Kakadu was used at Fukushima,” says a report. Forty years ago, four young men in protest put up a “tent embassy” on the lawns of Parliament, according to Ali. “Thousands of people from indigenous communities plan to hold massive protests over land issues on Australia Day on January 26.” While for White Australians celebrate this as their foundation day and call it Australia Day, for the First People this is simply Invasion Day, the day when Captain Cook arrived on their shores.

Hope all this will make you grab a copy of Ali’s memoir, Too Afraid to Cry. Those headed to the Jaipur Literature Festival, do catch Ali in conversation with Ms Militancy Meena Kandasamy on Thursday, 22 January 2014.