‘Strong in culture, not weak in pain’ 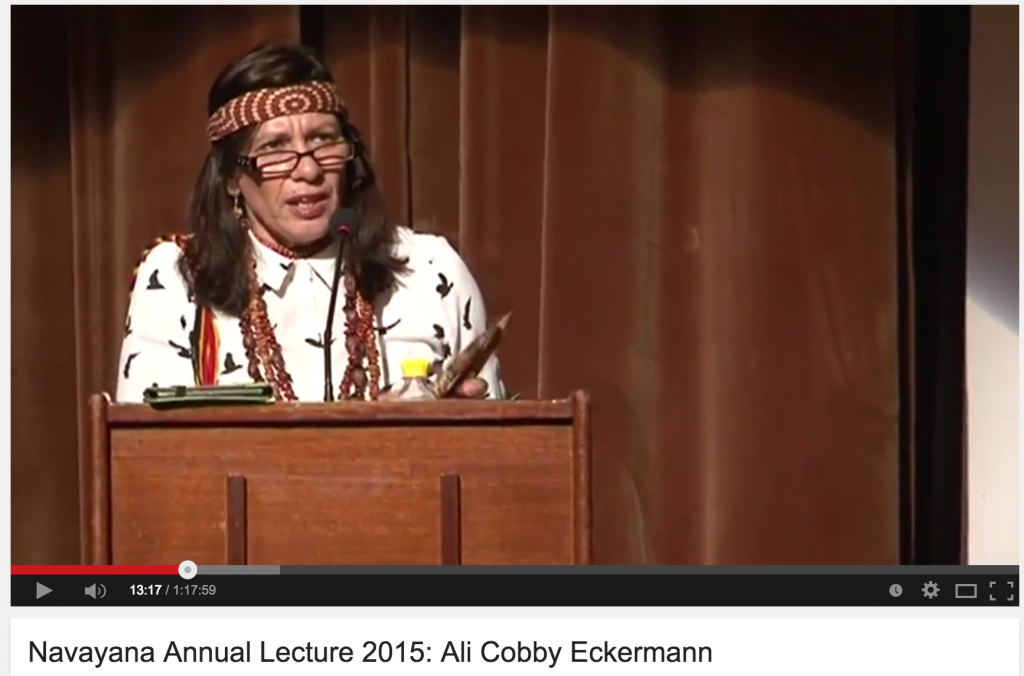 Ali Cobby Eckermann delivered a staggering, powerful lecture, “The Kangaroo is Dead at the Waterhole” on 17 January 2015 at the Stein Auditorium, India Habitat Centre, Delhi. This was the third Navayana Annual Lecture, and Ali began by remembering her family, her ancestors by playing bimili (clapsticks): Aboriginal hand-made hardwood sticks that are branded with hot wire. She announced at the outset that “the journey of my lecture will be circular, not linear”—much like the way she tells her story in Too Afraid to Cry.

Skillfully weaving two strands together—the ruthless foray of land for nuclear energy and the insensitivity of government policies that affected the stolen generations—Ali said, “As children, the separation of us from our identity was like an atomic bomb in our hearts.” She went on to give us a moving account of a continuing resistance that is never heard of, often ignored, but very real.  Abducted children of the Stolen Generations are now ‘assimilated’ as state soldiers. They are sent on operations of evacuation and recognize the protesters they are charging at to be family. The older women of the community, who have lived on that land their whole lives, use their pensions to fund the resistance. Ali spoke of how her grandmothers, in the 1970s, sang a particular song, a magic song that opens hearts, and how they “won this war using culture and dignity as their greatest weapons”. In 2004, they forced the federal government to stand down. This sad, elliptical history has made them “want the right”, making them “strong in their culture but not weak in their pain”.

Ali also warned that the Indo-Australian nuclear deal, where Abbot promised “uranium yellow coke” meant to power India’s nuclear reactors, is based on a history of deceit and denials by the Australian government, and she had doubts about the integrity of the Indian government. The irony hit home when she played a short, promotional video by Pangea Resources—an international consortium that has been lobbying to build a nuclear waste dump in Australia for the last 25 years. Amidst diagrams, flowcharts and a million statistics, it did not once mention the original inhabitants of the land,  land it had declared was best for disposing nuclear waste even once, land that Ali said “was our heart”. The corporation merely spoke of such land as arid, flat, uninhabited.

Ali explained the sparse style of her memoir by talking of her first experience “out bush”. She came to associate the idea prevalent amongst her community elders that “if you talk too much, you have a mental problem”. She said it reflected the arrogance of the human ego. Such arrogance and garrulity was evident in government policies that led to environmental degradation and forced evacuations. She decided to let the experiences come to her of their own accord. This learning was a two-way process. She said, “I taught them too of what happens, of the damage that takes place when you’re taken away from family.” It was hard to combat the urgency with which she felt she needed to reevaluate her experiences, and the many defenses that came with it. “Sometimes I felt I made it back with only ten minutes of my life left,” she told the sociologist Amita Baviskar who was in conversation with her. Despite the frequent claim that a large allocation of the state budget is set aside for the Indigenous peoples there is glaring lack of proof of it. And this was how, she concluded, the government forced her to become a poet.