‘AoC: party document or a text?’

Ms Militancy Meena Kandasamy, the writer-poet-translator, embraces words and rejects labels. In this interview to Youth ki Awaaz, she does not mince words speaking about feminism, Audre Lorde, ghar-wapsi, Alain Badiou’s Communist Hypothesis, or Arundhati Roy’ introduction to the annotated Navayana edition of Annihilation of Caste.

Q. There have been heated arguments around Arundhati Roy’s Introduction to AOC, some Dalit activists allege that she has deliberately tried to appropriate Ambedkar for her own personal gains. Also, journalist Neha Dixit recently faced criticism on the same question of who can write about Dalits and what approach should they take. How do you think writers and journalists can sensitively tackle this question of privilege and oppression?

Dr. Ambedkar democratized Indian society in a massive way. When I see this debate about Arundhati’s introduction, I see that it is no longer debated as a text, but almost as if it was a party document. That dissent, that criticism, that culture of debate is something that was fostered by Dr. Ambedkar.

The vital message of Arundhati Roy’s introduction is summarized in its last line—that the left should take up a critique of Brahmanism, and that anti-caste activists should take up a critique of capitalism. I think the debates that have followed are not just about writers and activists and scholars imputing reasons to Roy’s project, but also a reflection of the political perspectives. If you look at the criticism against Roy’s introduction, it clearly reflects the standpoint that communism/ communist struggles are a failure. One often encounters the subtext of endorsement of capitalism, and of a certain idea that Dalits are embracing the free market as a means of breaking caste structures and strictures. The debate that we are witnessing is the debate between identity politics and radical left politics. 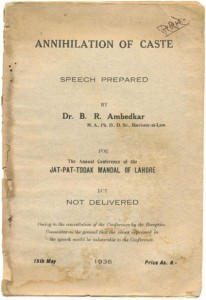 From a leftist / Marxist interpretation, one has to argue that beyond an individual reflecting about their privilege, or on their oppression, or on cultural difference, we have to unite forces to fight caste. One of the most important works on caste for instance is a chapter in Scripting the Change, a collection of essays by Anuradha Ghandy. She was obviously from a privileged background, something which she abandoned when she joined the Naxalites. There is a 29-point programme that is put forward in her book on how the Maoists would work towards the annihilation of caste. I think that beyond reflecting on one’s privilege, this is the kind of engagement that is necessary. I do not personally agree with everything there, but I think that it is commendable that a revolutionary party has a plan of action to put an end to caste.

I do not think that caste background is per se a deterrent to fighting against caste. Look at early communists: Comrades BSR, B Srinivas Rao who organized peasants and landless labourers in East Tanjore or Manali Kandasamy did not allow their caste backgrounds or their privilege to come in the way of working alongside the most marginalized. They did not fear the brutality of the state machinery or the feudal structures. One can produce an endless list of such names.

I think such a debate will continue and will polarize opinion. I believe that a system as heinous and as deeply entrenched as caste will not be wiped away by capitalism, it will only be strengthened by it. Capitalism thrives on the exploitation of cheap labour and caste is not any different in that regard. In my opinion, organizing women, the oppressed people, the marginalized, the working classes will lead to a successful struggle to annihilate caste. In fact, if you read the history of the labour movement in Madras Presidency, you will see the scores of times when caste divisions have been used by capitalism to break up the most tenacious and determined worker’s strikes.