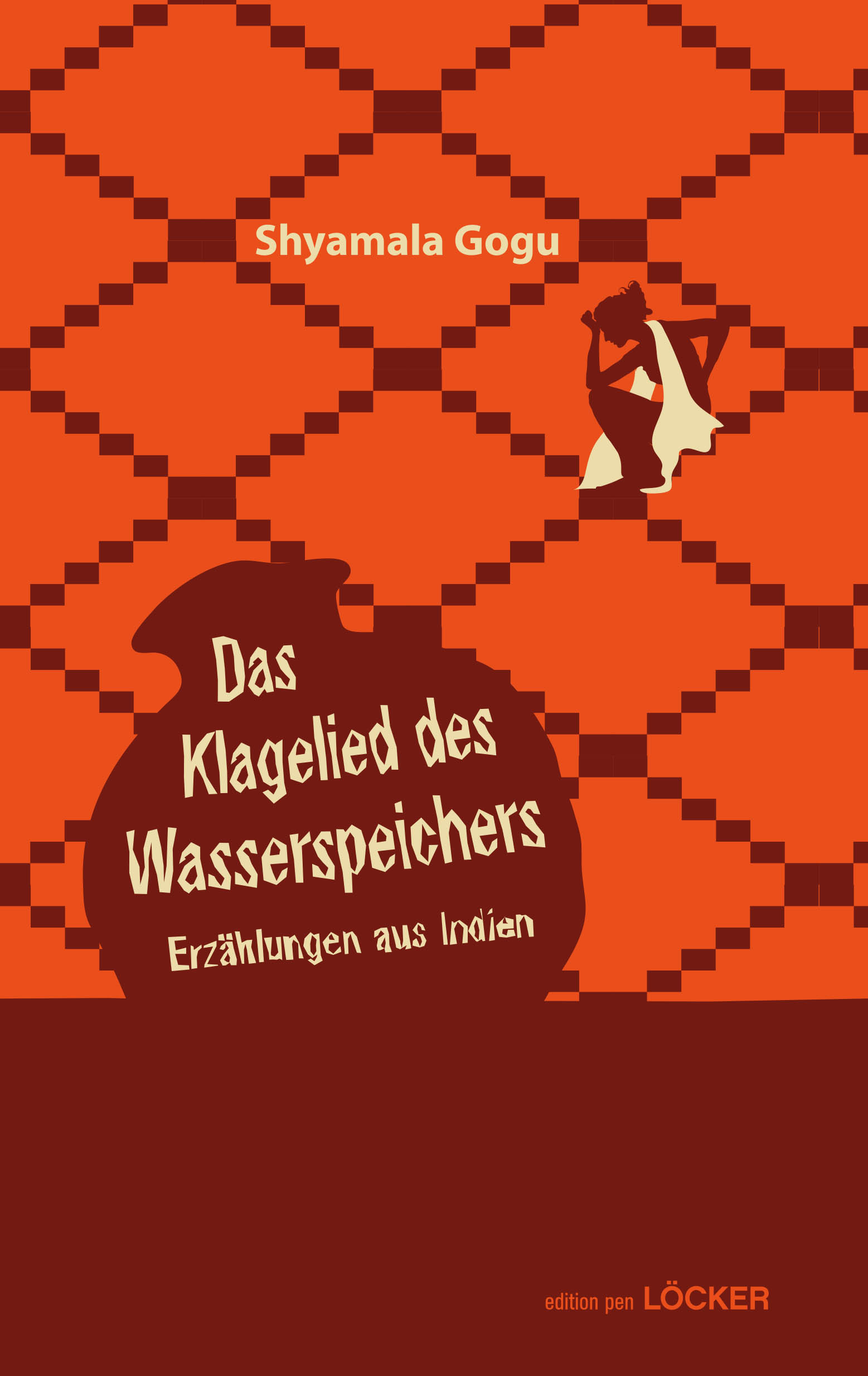 When Gogu Shyamala sang for her German translators

Stephanie Kreiner, who coordinated the translation of Shyamala’s stories, recounts how it all happened in Duesseldorf university, Germany.

In August 2017, Gogu Shyamala’s short story collection was published in German under the title Das Klagelied des Wasserspeichers by the Austrian Loecker Verlag. The German volume takes it title from the story “The Village Tank’s Lament” which in the original Telugu is “Oorajeurvu Kadupu Kota”. The critically acclaimed collection was first published by Navayana in English as Father May Be an Elephant and Mother Only a Small Basket, But… in 2013, rendered in English by nine translators. The German anthology is part of the ‘Human Writes—Translating Dalit Short Stories’ project a collaboration between the master’s degree programme in literary translation at Heinrich-Heine-Universitaet Duesseldorf, Germany, and the PEN-Club Austria. 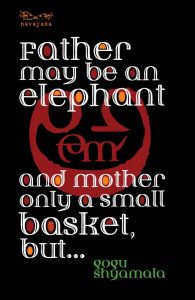 People in the German-speaking countries of Austria, Germany and Switzerland might know about the caste system in India but only very few have heard of the dalits and their struggle. The main aim of the book is to make the German-speaking audience aware of the situation of dalits in India and give them a glimpse into dalit culture. Inspired by B. R. Ambedkar’s slogan “Educate, agitate, and organize”, the collaboration between the Austrian PEN-Club and the translators of Duesseldorf university aims at spreading knowledge about dalits. Only those who are aware of dalit issues can support the movement. The Austrian PEN-Club is particularly active in encouraging human rights movements like the one of the dalits. For more than 90 years, it has been supporting poets, essayists, novelists and journalists who fight against discrimination and promote human rights, whose human rights have been violated, who have been incarcerated by their governments, or who have to live in exile because they speak out against injustice.

Gogu Shyamala’s anthology is the second collection of short stories by a dalit that has been translated in the context of this non-profit project, the first being Harish Mangalam’s Light of Darkness. Its German translation was published as Aus dem Zwielicht in 2015. Both translations are based on the English versions of the short stories since the translators at Duesseldorf university are educated in English, French, German, Italian and Spanish but do not speak Gujarati or Telugu, which are the mother tongues of Harish Mangalam and Gogu Shyamala respectively. To make up for possible mistakes that might result from working with translations instead of the works of the authors themselves, the publication of each translation was preceded by intensive workshops, in which the translators worked very closely on their texts with the authors.

Funding from the Heinrich-Heine University dean’s office made it possible to invite Gogu Shyamala to Germany in late June 2016. At the time, the young translators were almost finished with their translations, so that they could discuss the short stories in detail and talk about the cultural references and implications. Gogu Shyamala was accompanied by Lalita Kanuparti from the Anveshi Research Centre for Women’s Studies in Hyderabad, who sometimes helped Gogu Shyamala to translate myths and songs from Telugu or Hindi into English and gave additional information about women’s writing in post-independence India. 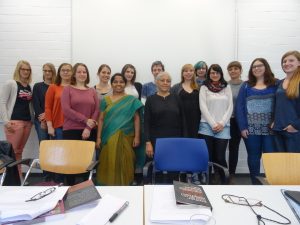 The translators used the opportunity to confirm their research into the background of the stories. They asked about certain realia that were difficult to find online or in the books that were available to them. Gogu Shyamala sang some of the songs that she refers to in her stories, explained the rules of the games children play in the villages and elaborated on the implications of certain constellations. The importance of the workshop became clear when Gogu Shyamala illustrated the dalit re-interpretation of traditional Hindu mythology. For example, Tataki is considered a demon in traditional Hindu myths, however, Gogu Shyamala explained that many dalits admire her because she fought against the takeover of her land by dominant castes. Additionally, Tataki is an important symbol for female empowerment. Most of these re-interpretations are passed on as part of an oral tradition and have never been written down, especially not in Hindi or English, so that the translators would never have been able to uncover these layers of the short stories during their research had it not been for the workshop.

Speaking to Gogu Shyamala also helped the young translators to understand how normal the discrimination against dalits is to this day. They were especially appalled by the jogini tradition, which young girls suffer from and which is still practised in certain villages even though it is against the law. For the young translators and Stephanie Kreiner, the coordinator of the project and editor of the anthology, it was an inspiring experience to get to know Gogu Shyamala and her passion for dalit and women’s rights, education, and literature. After the workshop there was a reading, in which Gogu Shyamala and some of her German translators read from the Telugu, English and German versions of the short stories to give the German-speaking audience a preview of the anthology. The translators involved in the project are: Mareike Aepker, Theresa Benkert, Theresia Brasche, Martin Fischer, Friederike Hofert, Sarah Ann-Kathrin Kranz, Julia Königs, Helena Küster, Mareike Ilsemann, Louisa Kuck, Julia Renner, Annabelle Staiger, Laura Strack, Jennifer Thomas, Sara Walczyk, Maike Wender, Constanze Wehnes and Fabienne Weuffen.

In the weeks after the workshop, the translators revised their translations and incorporated the findings of the workshop into their texts. Gogu Shyamala wrote a preface to the anthology, in which she addresses her German-speaking audience directly. Now, more than a year later, Gogu Shyamala and her talented, young translators from Duesseldorf university are finally able to reap the fruit of their labour and hold the German translation of the anthology in their hands. Hopefully, it will increase awareness in Austria, Germany and Switzerland of the dalits’ struggle and their literature.

To get your copy of Gogu Shyamala’s  Father May Be an Elephant and Mother Only a Small Basket, But… , click here.