The measure of a murder

This review of The Way I See It written by Nikhil Govind appeared in the January–March 2018 issue of the literary magazine, Biblio.

Though I have written a fair number of reviews, this is the first time I feel compelled to briefly situate myself as a reviewer. This is because the book is of a now famous contemporary figure — Gauri Lankesh, the journalist and activist who was shot dead in Bangalore last year. I generally avoid such charged and over-determined topics to review, both for my inadequacies of knowledge (I do not know enough about southern Karnataka politics), but also because I am reluctant to have to face the disappointment of those who might expect a straight martyrography. So I submit that this is a perspective which will not read the book solely from the vantage of her awful death, but will rather try to review this collection as a generic, reasonably informed commentator on the contemporary South Indian landscape.

The Way I See It is a slim anthology that is organised thus: 1) Gauri Lankesh’s early, more ‘investigative’ journalism in Sunday magazine; 2) an interview with her from 2000 when she had just taken over the important Kannada journal Lankesh Patrike founded by her father P Lankesh; 3) her more ‘editorial’ writing as well as personal profiles in that journal; and 4) a set of her writings as a columnist in publications such as the Bangalore Mirror, The Wire, Tehelka, etc. The final section of around 40 pages has Gauri’s mother’s reminiscences of her, as well as tributes by friends and colleagues from the media and the political world. Edited and anthologised by the sociologist Chandan Gowda, the book gives us a fairly rounded picture of a contemporary bilingual journalistic career. But it also reminds us of the urgent need for richly detailed media histories of all of our regional media ecologies. If anything can save us from the purely entertainment–driven news universe that we currently inhabit, it is only the sharp and steadfast voices of people like Gauri Lankesh. 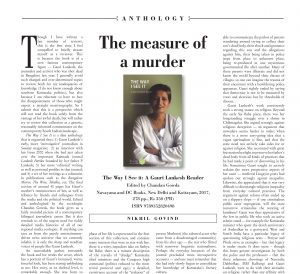 An unavoidable pathos surrounds the book and for weeks the cover, which has a portrait of Gauri’s bemused, warm, forceful look, has been staring unblinking at me. Her story, at its skeletal level, is remarkable enough. She was born to a father who was already well-known. P Lankesh was a talented novelist and filmmaker, though it was his association with the eponymous journal he founded in 1980, Lankesh Patrike, that made him a cultural celebrity. The journal inaugurated a unique style of reportage — at a time when print was dour and essentially concerned with reporting the dull statements of politicians, P Lankesh wrote with easy sarcasm, irreverence, courage and independence. He sustained this style for 20 years, till his death in 2000. And as much as anything he could have written, the fact that he refused to take advertisements for his journal showed his entrepreneurial mettle as well as his self-conviction. In following him in this difficult media business that required both political and entrepreneurial astuteness, Gauri showed both grit as well as a sense of adventure.

But it would take some time before Gauri fully claimed her father’s inheritance. Growing up, the daughter of this famous Kannada writer felt far more comfortable in English-language journalism — in not just the language, but also the ideas. Perhaps there was a need to explore a different world from Bangalore and Karnataka. After her education in Karnataka, she went to Delhi for graduate study, and began to work there. This phase of her life is represented in the first section of this collection, and contains many interests that were to stay with her: there is a witty, impudent take on Sathya Sai Baba; there is a minute description of the travails of “drudge” Karnataka chief ministers and the Congress high command (politics reduced to the most trivial protocol and ego); a detailed, eyewitness account of the “stakeout” of Rajiv Gandhi’s assassins; a sympathetic account of Coorg’s demands for statehood; a fine, menacing account of Bangalore’s first celebrity serial killer, one that details the life of the metropolitan underclass.

But in 2000 her father died and her life was upended. She returned to Bangalore, and decided to keep the journal going despite having inhabited a different world in Delhi for the better part of two decades. She returned to a place, institution and language with which she had only intermittent relations, and discovered how hard it was to run a journal in India without advertising support, and in the name of a father who was such a towering, self-confident institution.

She discussed some of this in the 2000 interview. However, neither in that interview, nor in the later profile, was there anything other than adoration of her father — as a person, father, litterateur and editor. This is a tad disappointing, but perhaps she had not yet had time to have a full sense of the Kannada literary world. Her sketches of important cultural figures such as film and theatre personality BV Karanth, writers Poornachandra Tejaswi and UR Ananthamurthy and actor Rajkumar are also thinly anecdotal and reverential. Of Rajkumar, she does distinguish the person Muthuraj (the talented actor who came from a disadvantaged community) from his alter ego — the star who flirted with narrower linguistic nationalisms. Perhaps the everyday busyness of the journal precluded more introspective accounts — and one must remember that she had only slowly begun to consolidate her knowledge of Karnataka’s literary culture.

This slow consolidation was perhaps the happiest period of her life. She discovered that she had indeed inherited the entrepreneurial strain from her parents (her mother ran a large and successful saree store). Alongside the comradeship in the larger world, the primary friendships she cherished were many unnamed workers of the independent media industry (translators, printers, accountants). In the first decade of this century, her increasing immersion of politics in southern Karnataka led to a more clarified (if occasionally more polemical) ethic. Her concerns became more local, and she was able to visit many sites of conflict and get firsthand accounts. She found solidarity and humour even in jail. Gauri realised that questions of communalism were entangled with other questions — mobilisations around faith were often about real-estate interests, or the careers of government officials.

Though she was better known within Kannada journalistic circles, it is important to remember that she continued to contribute as a columnist to English media. Her 2007 Tehelka piece stands out for its attempt to give emotional complexity to governmental ‘combing operations’. Beyond the circumstances of ‘encounters’, Gauri is able to communicate the pathos of parents wandering around trying to collect their son’s dead body, their shock and ignorance regarding this son and the allegations against him, their being taken in police jeeps from place to unknown place, being re-produced in one mysterious governmental file after another. Many of these parents were illiterate and did not know the world beyond their cluster of villages, so one can imagine the trauma of their encounter with a bewildering police apparatus. Gauri rightly ended by saying that democracy is not to be measured by votes and elections but by thresholds of dissent.

Gauri Lankesh’s work consistently took a strong stance on religion. Beyond the early Sai Baba piece, there was her longstanding struggle over a shrine in Chikmagalur. She argued strongly against religious deception — an argument that nowadays seems harder to make, when there is a more easy-going idea that a vague spiritualism is fine, and that the state need not actively take sides for or against religion. She recounted with great frustration her fight to preserve her father’s dead body from all kinds of practices that he had made a point of disavowing in his life. Sometimes Gauri sought to actively reclaim the more progressive aspects of her caste — medieval Lingayat poets had spoken out strongly against inequality. Likewise, she appreciated that it was very difficult to disentangle religious inequality from everyday cultural practices. The argument against reform often ended up on a slippery slope — if one criminalises public caste segregation, will the state tomorrow criminalise the wearing of kumkum? Gauri was thus appreciative of the few in public life who took an active atheist stand — for example the Karnataka minister who spent the death anniversary of Ambedkar in a graveyard. West and South India have a particular legacy of questioning religious texts – Periyar and Phule serve as examples – but that legacy is under strain. It does seem – though this bears greater investigation by both the police and the professors – that the three infamous shootings of Narendra Dabholkar, MM Kalburgi and Gauri Lankesh, were to do with their attitudes on religion, rather than any affinity with the organised Left.

For those who have no particular idea of who Gauri Lankesh was, the articles in the last section may be a good place to start. Rahamat Tarikere, a literary scholar and a senior colleague, gives a fair-minded account: the adversarial temperament of her politics was not to his liking, and unlike her he believed in separating “religion from religious perversion”. Nevertheless, he appreciated the clarity of her moral vision, especially in her later writing. K Phaniraj’s is perhaps the most detailed and sympathetic outline of her evolution, and gives a brief and pointed account of what she took from her father, and how she then took it forward in this new century. He gives a brief account of her attempt to widen a traditional anticonformist liberal base, with voices from the Left, Dalits, women, civil rights and free speech activists, housing activists, etc. A fine image concludes the essay — of how a single woman in her late 30s, Poornima, living 600 km from Bangalore, was inspired by Gauri. The woman

…made a placard of protest and stood in the village market place for an hour, then marched alone for 21 km to the nearby taluk town of Sagara, and held a protest demonstration alone…She had never met Gauri.