Before beginning her address at the Annual Navayana Lecture in 2015, Ali Cobby Eckermann, of the Yankunytjatjara/ Kokatha family from the North-West desert country of South Australia, invoked ‘cultural protocol’ to acknowledge the indigenous people of India. In doing so, she implored us to unearth and hold close a downtrodden memory: that there resides in the hearts and minds of the indigenous people—of this country and her own—the painful perception of a loss; that we have inherited the singular blindness which is the basis of it; and that it’s silent propagation threatens their annihilation.

A mere three years on, the National Gallery of Modern Art in Delhi is playing host to aboriginal art: the Indigenous Australia exhibition has been on display since 16 June and will run all the way up to 26 August, showcasing everything from mid-nineteenth century drawing notebooks and boomerangs by unknown artists to the well-known Albert Namatjira (1902–1959) who toyed with western realism and landscapes, and the edgy contemporary work of Vernoh Ah Kee (whose 2003 work Austracism opens the exhibition) and Tony Albert (represented by the haunting and wry Ash on me, 2008).

Snaking through the reds, blacks, whites and yellows of the gallery you are reminded of Eckermann’s gesture acknowledging India’s indigenous people. A Nehruvian institution founded in 1954, the NGMA does not have a single work by an adivasi artist in its collection, as Venkat Raman Singh Shyam found out in Finding My Way. Even the great Jangar   h Singh Shyam, whose death anniversary (3rd July, 2018) just passed unnoticed, wasn’t allowed into its hallowed halls. And yet the voices crushed by history’s march keep finding their way, unable to erase the sense of loss imposed on them.

In her autobiographical work Too Afraid to Cry, Eckermann bears witness to this imposed forgetting. Federalised Australia engendered a hidden schematic, unannounced and unacknowledged, of a violent acculturation that relegated the indigenous identity under the foot of a white modernity—this came to shape her life. National policy was effected such that the state took away Aboriginal children from their parents and placed them in the ‘care’ of foster—white—families. Progressive, developed, rational, safe: these were the words created and employed by the state to sanction this uprooting. Eckermann ventures into the vicissitudes of this effacement that resulted in the creation of the Stolen Generation, to which she belongs. It stands as a testament to resistance against that insidious machine which attempted to erase millennia of tradition. It speaks the story of this erosion, in unabashed and unadorned text, and yet forms a chronicle capable of penetrating evocation; of hatred—towards coloured skin and ‘other’ faces; and love—from a mother not one’s own, and a community long lost. The force of this emotion drips from the fusion of poetry and prose that Eckermann creates, as it battles against those forces that threaten to wipe it out. Fortunately, she is not alone. 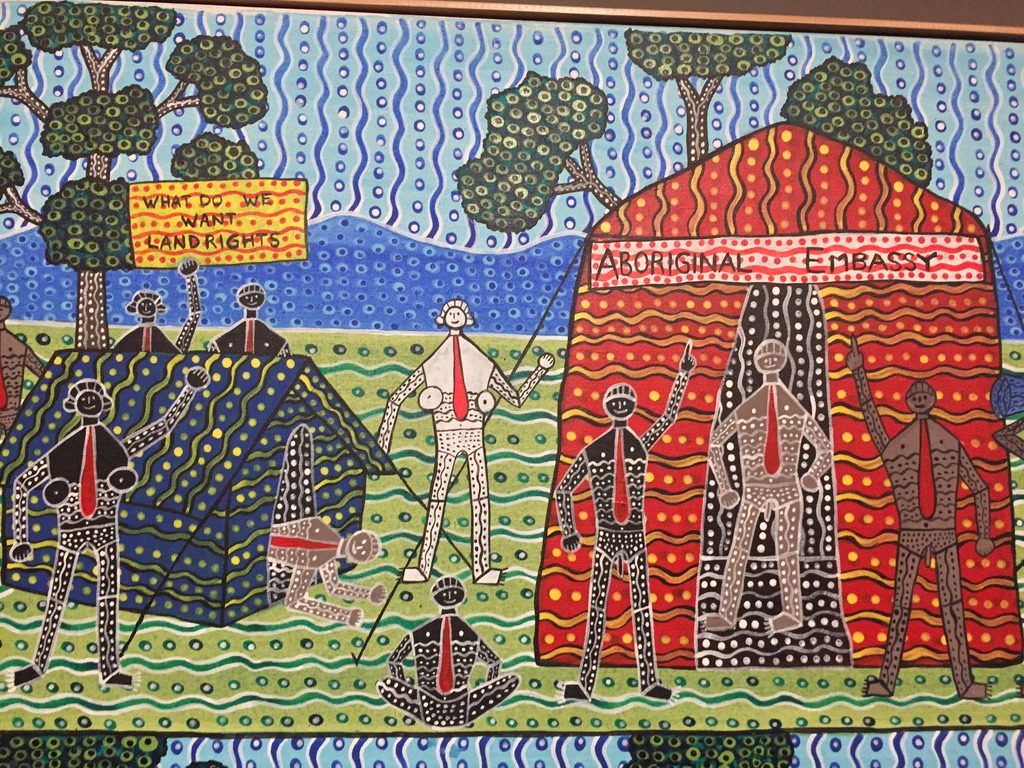 Australia, since 26 May 1998, has observed National Sorry Day, an acknowledgement of the near century of racist policy that systematically separated Aboriginal children from their parents. In the process of taking responsibility for the fact, the Australian state acknowledges the history and tradition of the people that constitute their nation. Given this history, we find a sequestered beauty in the winding strokes and forlorn figures that inhabit the Indigenous Australia exhibition. Opening with the theme of austracism, the exhibition takes on the burden of a historical denial of a people. The momentous task of attempting to right a wrong has at least begun. It portrays unflinchingly—from the arrival of the whitefella in 1778—the mechanisms of tyranny and oppression that came with colonisation. Through vivid representations of an unfortunate history, it accepts the maxim, at some level, that the Australian nation had required the disavowal of the Aboriginal identity, that it’s conquest and pacification was the condition of their existence. However, it goes a step further. In throwing light on our blindness, it encourages us to take full measure of the ways in which a community can exist apart from our own. The vivid exhibits of Aboriginal art puts power back in their hands; it lets them, through a myriad constitution of art, myth, and history, define themselves to (and against) this New World. As Arif Ayaz Parrey writes in the preface to Navayana’s edition of Carpentaria by Alexis Wright, “there is no duality of fact and fiction here. Reality is an admixture of two opposing streams of truth”. The Indigenous Australia exhibition allows us an entry into Wright’s Dreamtime, that unseeming domain whose existence is at the heart of this conflict. It also leaves us wondering if such a time will ever arrive for India’s indigenous people, given that the NGMA director (not even a BJP man) blithely pronounced in 2016: “The NGMA is for modern and contemporary art. There is the Crafts Museum to cater to Adivasi and tribal art.” 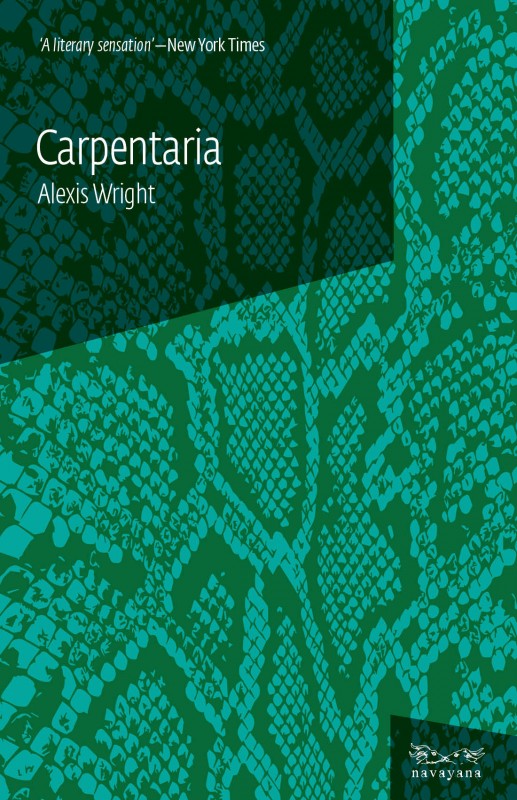 Wright’s opus simultaneously dismantles the Western tradition of constituting a story while seamlessly existing within it. The book begins with Normal Phantom and Angel Day, two Aboriginal people who live outside the boundaries of a white settlement. “They are tossed every which way by the state, practically live on a garbage dump, and are vulnerable to abuse and injury, with the threat of death always looming”. When a ‘big mining company’ shows up to challenge the Aboriginal land—its people already tangled in internal politics—the challenge of a neo-capitalist world strikes against the constitution of a twin-reality. Wright’s brilliance lies in being able to portray the wretched oppression of Aboriginal lives while simultaneously positing the reality of their mythical, indeed indigenous, infallibility. She creates a space where events “are not recollected. They happen all the time”. As Parrey says, “In another version, they are the Queen of Night and the King of the Ocean, powerful spirits which entire towns and seas cannot hold down”. Wright possesses the ability to allow the surreal to walk amongst us, to find in the distant dream of myth the heartland of cultural conflict, to verily beckon the second coming of Ngalyod, that Ancient Serpent of Creation, to slither and smash through the discourses of our world, creating anew rivers of pride and canyons of knowledge.

The text itself challenges the epistemology of the language in which it (and the coloniser) operates, and gently proposes its own. When grammar is found to be disjunct, the possibility suddenly strikes us, that the same language can exist differently. Within this book we find the diverse ways, unbeknownst to us, in which the Aborigine, through tyranny, murder, rape, and cultural-genocide, can survive through the means of this alternative constitution of reality—in myth, song, tradition, and memory. To Carpentaria belongs the realm of the subtlest audacity, allowing us to imagine worlds apart from our own, whose reality we desperately need to be real. In reclaiming this terrain, Eckermann once found meaning in her own life. In preserving it, the Indigenous Australia Exhibition resists a silent annihilation.

Today we have Gautam Adani (abetted by Modi and the Australian PM ‘kissing his boots’) burying his iron claws into the fibre of the Aboriginal world to rip away their land and their livelihood. It is but another step forward in the march of a machine that has attempted to overwrite the Aboriginal culture. Perhaps then the National Sorry Day is just another moniker for treacherous pacification. The force of that decision lies with us. Can we reject an insidious silence on the present and accept a painful past?

Ishan Bhattacharya is an intern at Navayana and a student of history at Ashoka University.