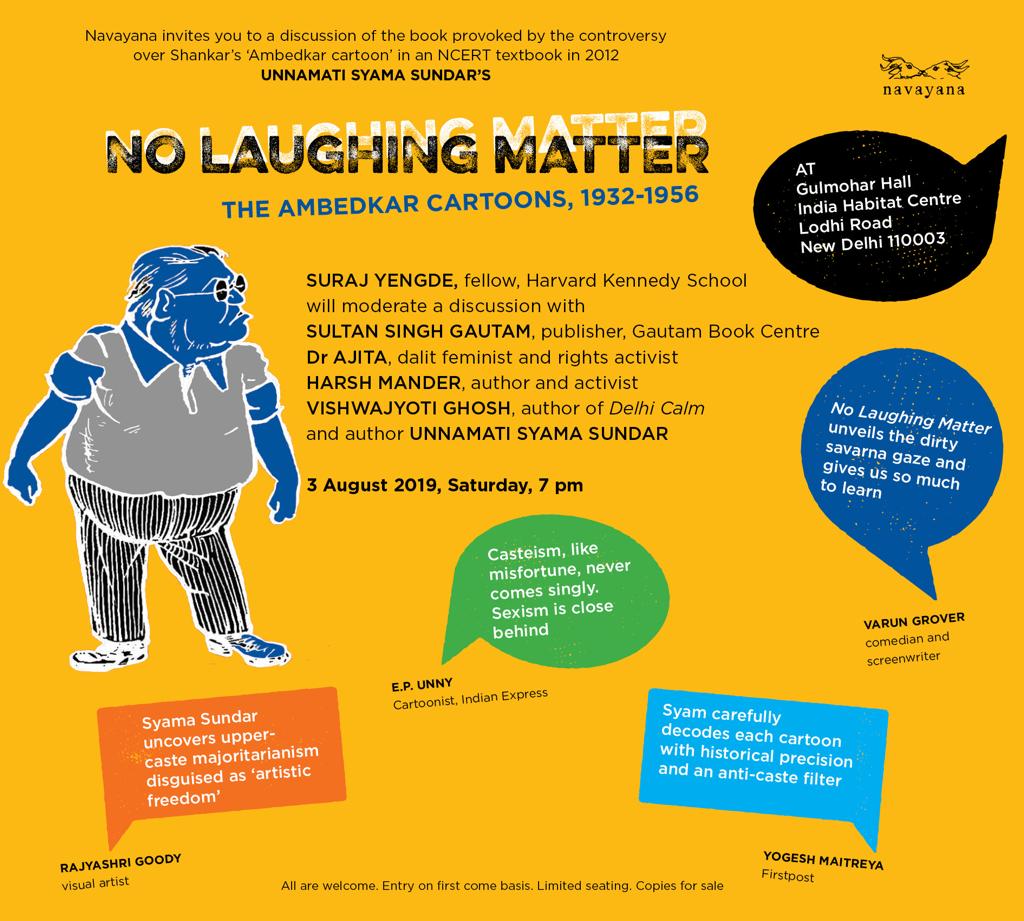 Laughing all the way

This year on 14 April, Babasaheb Ambedkar’s birth anniversary, Navayana saw the culmination of three years of work with the launch of Unnamati Syama Sundar’s No Laughing Matter: The Ambedkar Cartoons, 1932­–1956. Syam had been scouring through archives across India for years. The result, a collection of 122 cartoons, which Suraj Yengde, in his Foreword to the book, dubbed as a ‘museum of the perversities of the elites’, came to Navayana way back in 2016. What followed was assiduous research and writing of commentaries that gave shape to the final product.

Every time we send a book out into the world, we are plagued by apprehension: How will it be received? Will it garner any notice or be consigned to the trash-heap of history? We always hope that the love and care put into each book is vindicated in the ‘marketplace of ideas’. We are pleased that No Laughing Matter has generated a positive buzz amongst our readers. Syam pooled together all the positive messages he had received on social media and we decided to make a video that ends with a word of thanks from the man behind the book:

No Laughing Matter also received oddly thoughtful reviews in the media. Veteran cartoonist E.P. Unny wrote in the Indian Express that the book ‘does what the Parliament has failed to do’: create a space for honest, unsparing debate about the political responsibilities of art. Unny goes on to commend the book for giving the cartoonists ‘a taste of their own medicine’. The Hindu featured Yengde’s essay about how the book ‘overrturns usual assumptions about political cartooning’. Yogesh Maitreya praised Syam in Firstpost for ‘decoding each cartoon with historical precision and an anti-caste filter’. A review in the Mid-Day called No Laughing Matter a ‘lesson in the history of the making of the Republic of India … steeped in satire’.

Launches for the book were held in Mumbai and Hyderabad. A crowd of some seventy-odd people gathered in Bombay’s G5A, an upmarket venue in the genteel environs of the erstwhile mill areas of Mahalaxmi, on 30 June, in the midst of an incessant downpour to listen to gathered speakers about politics, art and the work of comedy. In attendance were the artist Prabhakar Kamble, the screenwriter and comedian Varun Grover, filmmaker Bishaka Dutta, along with the author Syam and publisher S. Anand. Surprisingly, also in attendance was a posse of Mumbai police force’s intelligence dressed in mufti. They appeared to be nonchalantly appreciative of the book and its message, and even bought copies.

In Hyderabad, the launch was held on 7 July at Lamakaan, where Navayana has previously launched several of our books. Speakers included cartoonist extraordinaire Shankar Pamarthy, the journalist Akhileshwari Ramagoud, the political thinker Kancha Ilaiah Shepherd and the author Syam. Pamarthy, who till then had regarded Shankar Pillai as a godfather of all cartoonists, was scathing in his critique of art as a handmaiden of those in power. Ilaiah, true to form, dropped several truthbombs and was his own effulgent and contentious self.

With the book being received with such warmth, we would like to thank all our readers who have supported us. We have more titles this year, and each of them will give you cause for pause. For now, the NLM caravan marches to Delhi. A panel will discuss No Laughing Matter at India Habitat Centre on 3 August. Speakers include: the scholar Suraj Yengde, who is on his annual break from Harvard and is just wrapping up his India tour, Sultan Singh Gautam, who has been running the Ambedkarite Gautam Book Centre for decades now, Dr Ajita, a feminist and a dalit rights activist, author and activist Harsh Mander, and the cartoonist and artist Vishwajyoti Ghosh. Also present will be Unnamati Syama Sundar. Next stop: A Pa Ranjith–led launch to be hosted by Neelam Cultural Centre in Chennai by the end of August. We will keep you posted.