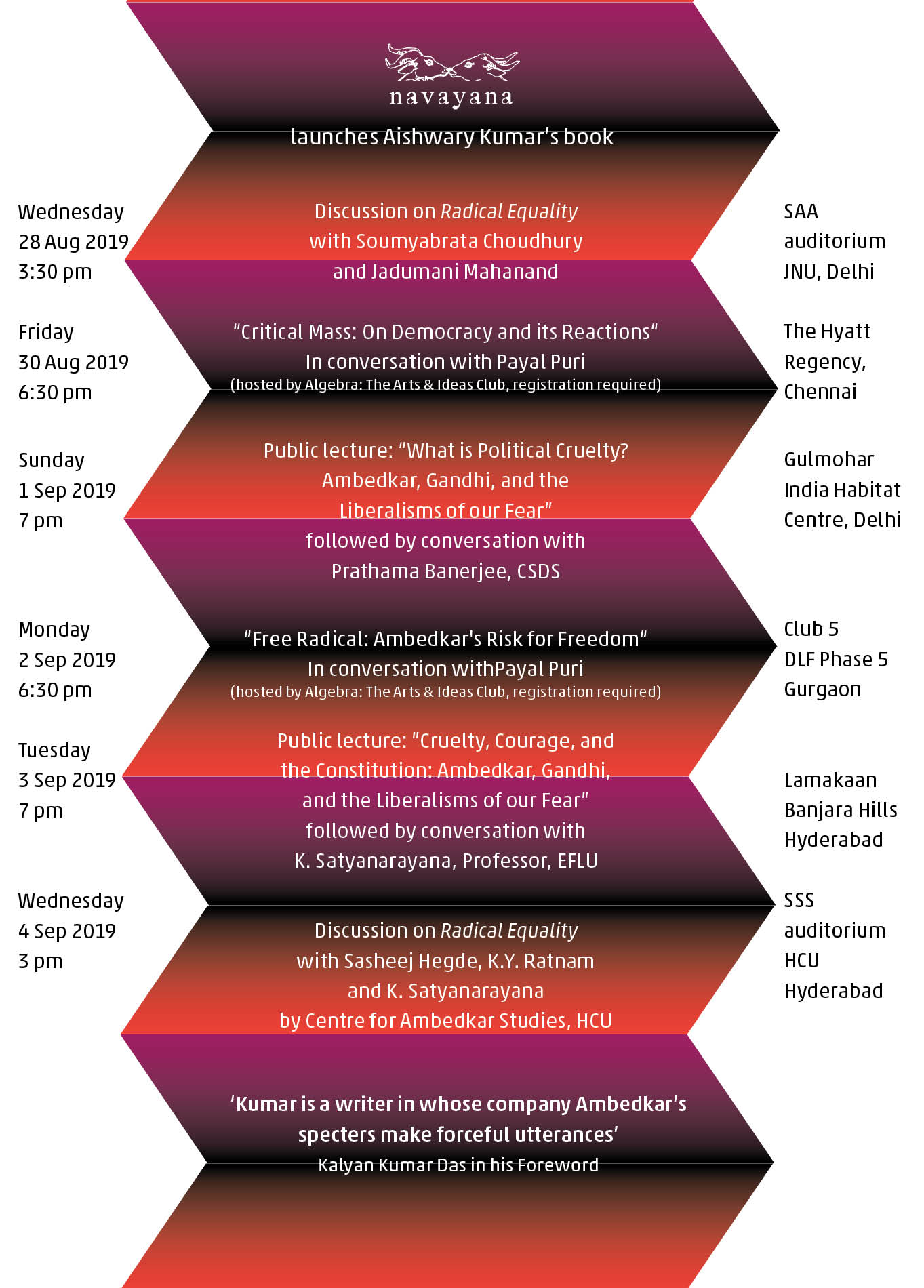 The Caravan of Radical Equality

Following the much-anticipated release of the South Asia edition of Aishwary Kumar’s Radical Equality: Ambedkar, Gandhi, and the Risk of Democracy, we are proud to announce a week-long tour by the author who will launch the book across three cities in BJP-occupied India. Part of the tour will be two public lectures delivered in Delhi and Hyderabad in which Kumar will inscribe the question of political courage and its antithesis—political cruelty—at the heart of the relation between Ambedkar and Gandhi. In discussing their political philosophies, the sites where the two thinkers come closest to each other will be identified, while also revealing their irreconcilable distance in thought. Kumar’s is a fraught endeavour—it is not easy to discuss two figures as divergent as Ambedkar and Gandhi in a manner which doesn’t devolve into facile pronouncements. And yet the risk of contraposing the two becomes all the more imperative in our fascist times. For Kumar, Ambedkar returns to us today because his constitutionalism offers a searing insight into the complexity of human fear that liberalisms of our time have decisively failed to examine. Come, partake in the discussions, where the well-worn concepts of democracy, equality, justice, freedom and dissent are given new conceptual relevance, and the possibilities of a politics of the future are given shape.

We also recently concluded the Chennai launch of Unnamati Syama Sundar’s No Laughing Matter: The Ambedkar Cartoons, 1932–1956. The event was organised by the Pa Ranjith–led Ambedkarite organisation, Neelam Cultural Centre. Ranjith, director of such super hit films as Kaala and Kabali, who spent a few hours with Syam over lunch till the evening’s event, said that while the portrayal of Babasaheb by cartoonists made for disturbing viewing, it makes us pause and think of how he must have believed strongly in himself, his mission and the importance of the many tasks he had assigned himself in the face of habitual and institutionalised prejudice. ‘They keep trying to defeat him but he proves to be simply unbeatable,’ Ranjith said to applause. He thanked Syam for this monumental project and said Syam must inspire more such research among the youth. ‘Most documents of dalit history are lost or have not been documented by caste Hindus. We need to do this, and Comrade Syam has shown us how.’ Syam in turn spoke of how he, like many, drew inspiration from blockbusters made by ‘brother Ranjith’, and how the cover image of No Laughing Matter offered a tribute to the eponymous protagonist of Kaala. Journalist Jeyarani appreciated how Syam uses these deeply problematic images to educate his readers about the mutifaceted aspects of Ambedkarite history. The evening ended fittingly with some buff fry that Syam and publisher Anand were treated to at a Kerala restaurant by Rupesh and Rajasekaran of Neelam.

We were also pleased to see the well-stocked bookstores in Chennai which had a healthy collection of Navayana titles. Do visit Higginbothams, which has been around since 1844, at Anna Salai, if you want to grab your copies of Navayana books.