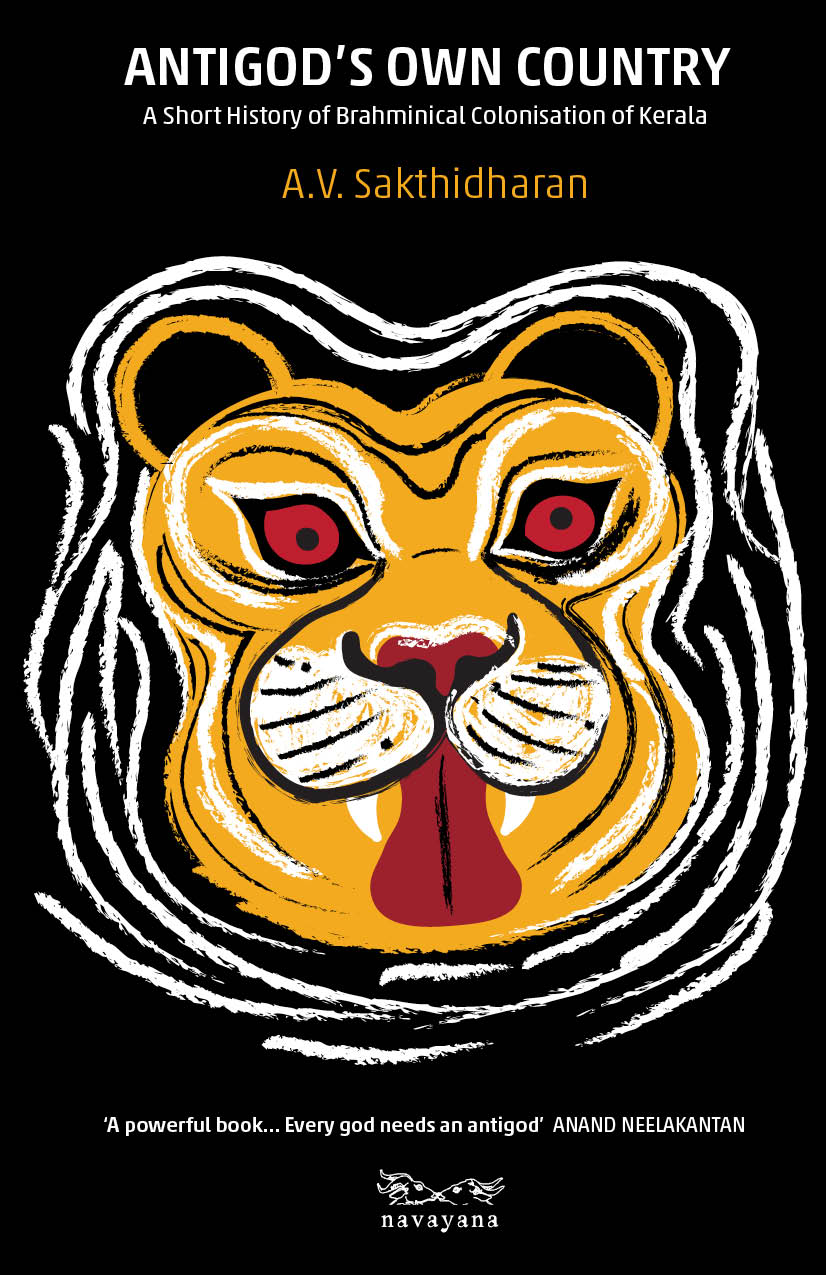 The asura is back

The suras are upon us. Asuras lie lamenting in cages.

We live in fascist times—a continuity of the perennial Indian proto-fascism. We are forced to accept vengeful and colonising gods as protagonists by default. Their morals and values and legends stand valorised. But what grants legitimacy to their claims of righteousness? Why must we accept them as the central figures of our cognitive maps?

This Onam, Navayana is proud to present A.V. Sakthidharan’s Antigod’s Own Country: A Short History of Brahminical Colonisation of Kerala. Starting with the story of Mahabali, the asura monarch, who was deceitfully ousted by the brahmin Vamana, we are introduced to a slew of antigods, rakshasas and tribal deities who were systematically absorbed into the Hindu pantheon, and relegated to the role of villains. These figures, who formed part of Adivasi, Dravidian, Buddhist and Dalit narratives with their egalitarian spirituality, confronted an invasive brahminism. Their stories are the stories of the struggles and opposition of the first peoples of the state against the tyranny of inequality. Sakthidharan collects together these tales which have survived away from the ‘mainstream’ discourse and presents us with an alternate mythology, an alternative foundation of stories for a utopian society-to-come.

We have visited the story of Mahabali twice before in our backlist. The graphic novel A Gardener in the Wasteland: Jotiba Phule’s Fight for Liberty was an exploration of Jotiba Phule’s telling of Baliraja’s story in the context of Maharashtra. Adapted from his seminal Gulamgiri, Phule too told the story as a polemic against brahminical colonisation. Gail Omvedt elaborates on Baliraja’s ideas of utopian rule in Seeking Begumpura: The Social Vision of Anticaste Intellectuals. A selection of the utopian ideas of various anticaste intellectuals who rose to prominence over the centuries of caste oppression, this book draws its title from the bhakti radical Ravidas (c 1450–1520), who first envisioned an Indian utopia in his song “Begumpura”—a modern casteless, classless, tax-free city without sorrow. Of course Delhi witnessed the government-ordered demolition of a temple of this very Ravidas on grounds of encroachment. It seems the city does not have space for Begumpura.

Mark this Onam with Antigod’s Own Country, and stock up on our arsenal of good books available on navayana.org and across bookstores. You can also read an excerpt from the book here.