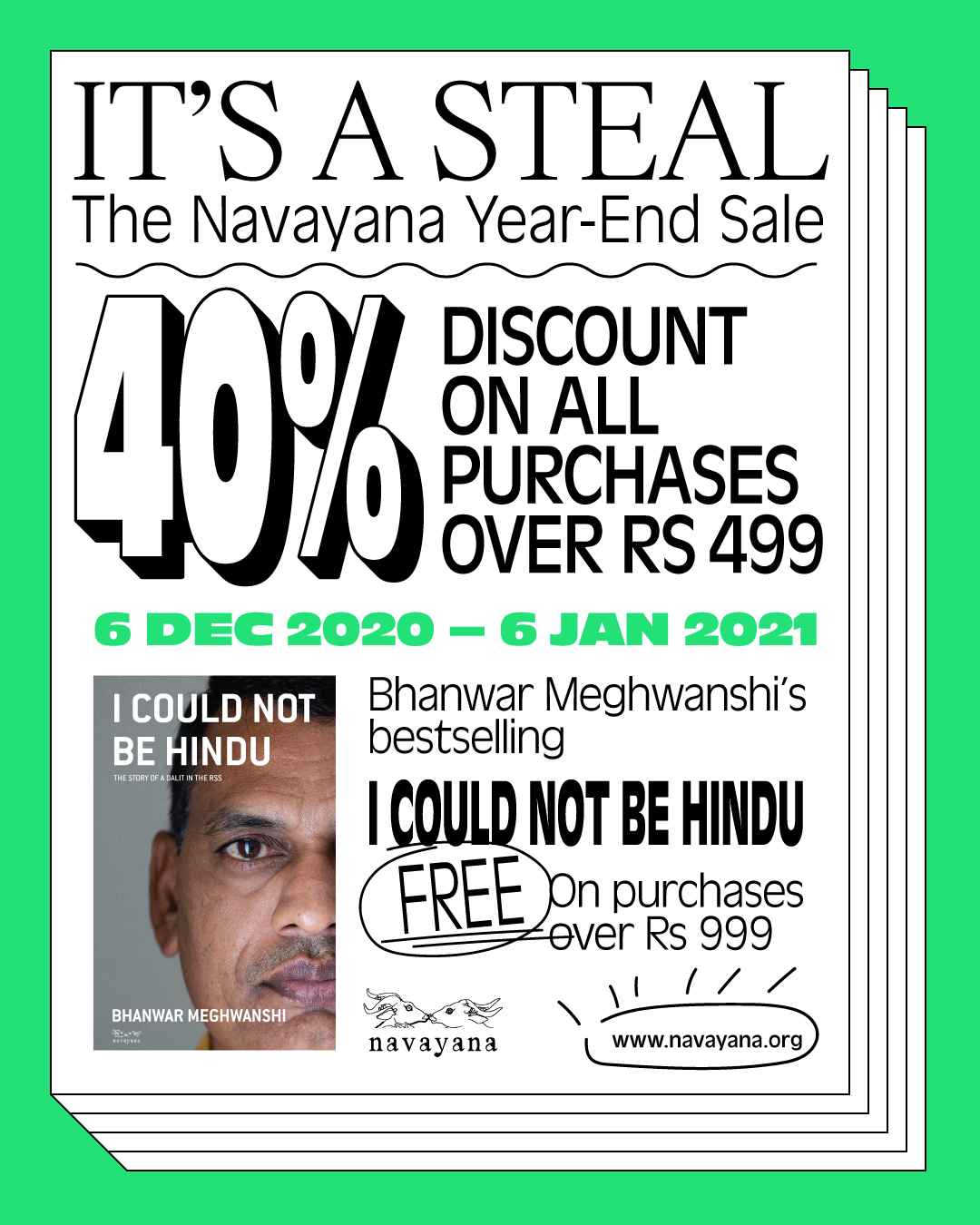 6 December is the time of remembering the passing of a suit-clad Bodhisatta. While the Buddha in his time often had the backing of some powerful kings and the state, the Bodhisatta of our times, B.R. Ambedkar, had to go around asking for financial help to publish his opus, The Buddha and His Dhamma. Babasaheb was not unselfconscious of the metaphors he deployed when he was forced to beg like a bhikku with nothing to lose. In one of his many letters and reminders to M.R. Masani, then Chairman of Tata Industries Ltd, whom he had approached for financial help, Ambedkar says on 17 March 1956: “I’m dreadfully in a hurry and if Mr Tata refuses my request I’d like to go with my bowl to another door.”

After assuring themselves that a book on the Buddha might not be “controversial”, on 1 May 1956, the Sir Dorabji Tata Trust sanctioned Rs 3,000. Needing another Rs 20,000 to cover printing expenses, Ambedkar then abjectly wrote to prime minister Jawaharlal Nehru on 15 September 1956, a month ahead of the mass conversion, asking “if the Government of India could purchase 500 copies for distribution among the various libraries and among the many scholars whom it is inviting during the course of this year for the celebration of Buddha’s 2,500 years’ anniversary” (BAWS Vol 17, Part 1, 2003, 444–5). He was turned down, with Nehru and S. Radhakrishnan, then vice-president and a man who embarrassingly believed that Buddhism was an “offshoot of Hinduism”, not showing a modicum of vinaya. Nehru, wearing a mask of indifference to his former law minister, proffered gratuitous business advice: “I might suggest that your books might be on sale in Delhi and elsewhere at the time of Buddha Jayanti celebrations when many people may come from abroad. It might find a good sale then.” The greatest exponent of Buddhism after Asoka had ruthlessly been kept out of this Buddha Jayanti Committee presided by Radhakrishnan.

Although Ambedkar led the largest religious conversion in human history, The Buddha and His Dhamma was only to be posthumously published (like its unpublished prequel Riddles in Hinduism). Let us not also forget that his other pivotal work Annihilation of Caste was self-published (on 15 May 1936) after the savarnas who invited him to speak baulked at his conviction and courage to bring the whole house of caste down. We join the panther, Namdeo Dhasal, in saying:

I won’t look for you among the bulls and the bears of the market, or in the clock of the present Time.
I won’t seek you in the distance between the crow and the factory, the public urinal and the prison custody.

Navayana was founded in 2003 as a purpose-driven vehicle: to take forward Ambedkar’s ideas and the thought of equality. Over the past few years, we have tried to time our new titles around the Ambedkar calendar: last year, to commemorate 6 December (not by coincidence also the day the Babri Masjid was razed in 1992), we published Bhanwar Meghwanshi’s I Could Not Be Hindu: The Story of a Dalit in the RSS, a book that Suraj Yengde says is ‘an essential read for those who are invested in the Hindu Rashtra’.

The same time last year, Shaheen Bagh and its many actors showed us what true speech of resistance sounds like. By March, the pandemic forced this idea to be shut down. How do we think our way through this impasse? We now have a book that helps us do that—Soumyabrata Choudhury’s Now It’s Come to Distances: Notes on Shaheen Bagh and Coronavirus, Association and Isolation. For those who have not read his first title with Navayana, Ambedkar and Other Immortals: An Untouchable Research Programme, we offer the Shomo Doubled pack: get both his books for a whopping 40 percent discount at just Rs 478 (not 798).

December also marks the return of our year-end sale (6 December 2020 to 6 January 2021). This time, we are offering 40 percent off on all purchases above Rs 499—reach this mark in the shopping cart, and find yourself billed for just Rs 299 (shipping is not free though; the courier companies need to be paid). It is still a steal. 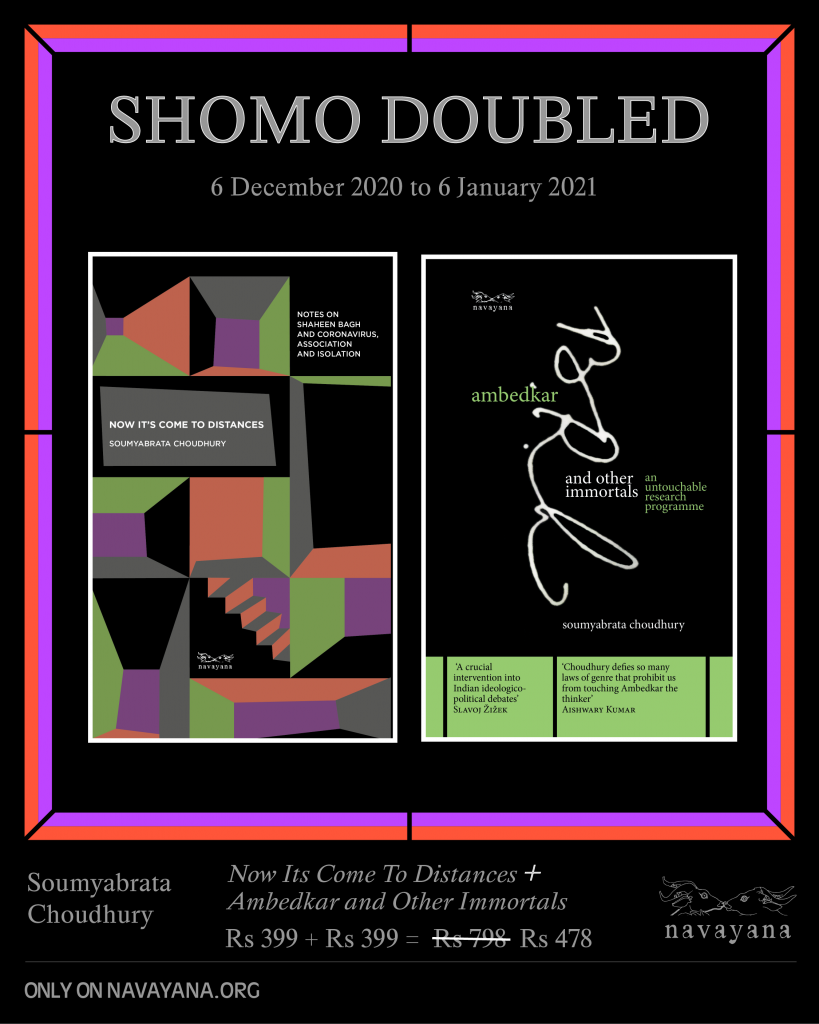 And each time you cart crosses Rs 999, we are throwing in Meghwanshi’s bestselling book, I Could Not Be Hindu—for free. The scheme of Shahbaz masks offered free with many of our tailor-made packages remains in place. The generous Library Box-Set has proved to be much loved and sought.

Starting with Now It’s Come to Distances, Navayana is tying up with the design studio November to creatively promote our work across social media platforms. One of its founders Shiva Nallaperumal offered their help on reading an account of the Navayana story earlier this July. To kindle your curiosity further, these short videos of Shomo talking as he makes chai should help. This is unlike any other version of ‘chai pe charcha’. We now need our readers, strangers who become intimate friends, to help us convert these efforts into sales.

Navayana is nothing but an incorporeal shadow compared to Sun-like legacy of Ambedkar of which Dhasal sings:

That Sun flies like the New Year’s butterfly and spreads light;
That Sun grows parallel to railway tracks;
That Sun loosens the stone walls of universities;
It moves only from one freedom to the next.