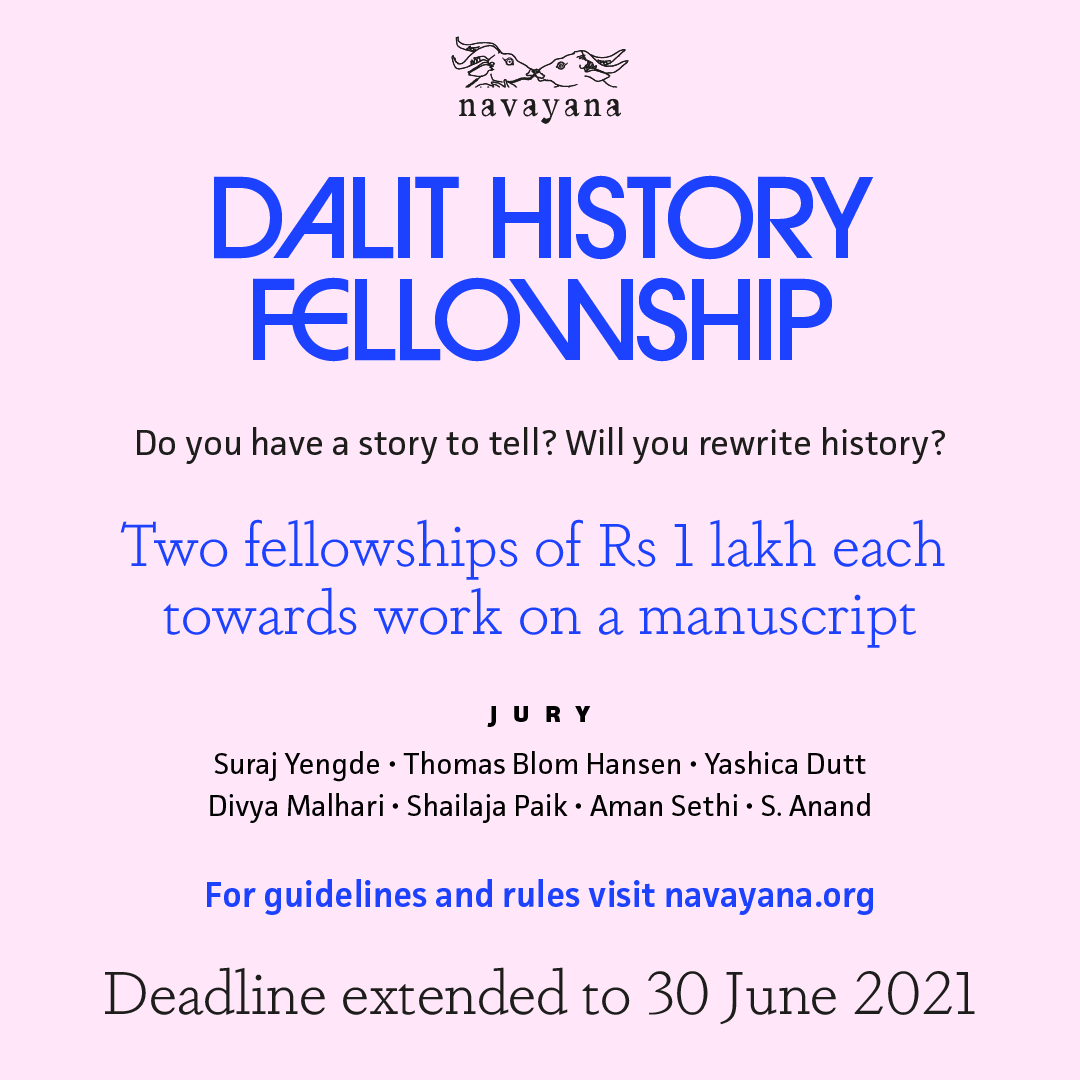 Click here for the complete Rules and Regulations of the fellowship

One of the perplexities of celebrating Dalit History Month is the niggling doubt about the rest of the year. Do all months other than April belong to brahmanical history? Now, of course, in thinking this there is a bit of hyperbole. Yet, the yearning to capture all of history and not just have a protected enclosure of enjoyment is precisely the aim of annihilation of caste. Dalit history is rife with events, each more explosive than the last, that can embolden even the most dejected souls. These stories can circulate in families, in neighbourhoods, among people who are closely linked with movements, among people who accidentally stumble onto the scene of history…

What is conveyed by the thought and act of gathering in a public assembly around the image of Babasaheb Ambedkar—an act enacted across the subcontinent from veli-wadas in villages to spaces in a university (the mess hall, the reading room, the shopping complex)? Each act of putting up the image of Ambedkar or of other dalit icons in each institutional and public space has a history. When did Sabarmati Hostel in JNU get its first Babasaheb Ambedkar image in the common area? How was the SC/ST Employees Association formed at the Adyar Bus Depot in Chennai and when did they observe Ambedkar’s birth anniversary the first time?

On 10 October 1994, two dalit men—John Thomas and Ezhumalai—were killed in a police firing in Karanai, Tamil Nadu, for reclaiming land legally assigned to dalits. The community had erected a statue of Babasaheb Ambedkar on 5 October 1994 on the land illegally occupied by powerful savarnas after it had been allotted to dalits during the colonial period. In official parlance, what the dalits did was ‘take adverse possession’ of the land. The Panchami Land Movement, as it was known, had the support of the local church where the priests were dalits. In the study report “Understanding the Struggle for Panchama Land”, C. Jerome Samraj writes of how Fr. L. Yesumarian was involved in retrieving lands for dalits since 1989, and how he started the ‘International Ambedkar Centenary Movement’ in 1990. Another priest, Fr Martin, was directly associated with the Karanai struggle as part of the Social Action Movement. Among the savarnas who had cheated the dalits of land was a former Inspector General of Police, Perumalsamy, who enjoyed possession of 42 acres that belonged to the Depressed Classes and could not be sold or transferred to non-dalits. So the police attacked the dalits with even more vehemence. The Ambedkar statue was the brainchild of one of the dalit landholders in Karanai, Deepan Chakravarthy. It turned the whole issue on its head. The statue was a means of reclaiming what was legally theirs. Says Samraj:

When the police and revenue officials intervene to stop this, the people gather around the statue to prevent them from any action. When the dominant castes tried to recapture the land, Yesumarian strategically opened a beef stall at the edge of the captured land and took the beef into the streets and sprinkled the blood all over the land to ‘pollute’, as the dominant castes will not any more enter the land

A tremendous act of courage, given the kind of impasse in history we are now in. 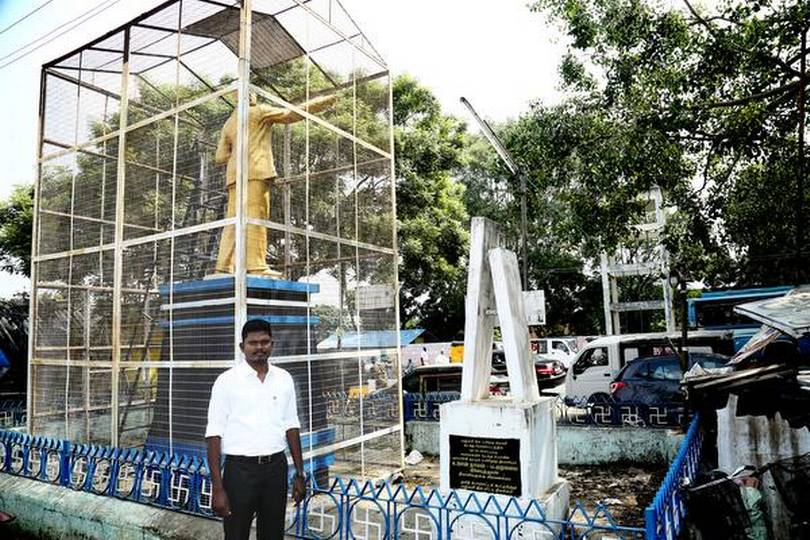 At the memorial for John Thomas and Ezhumalai in Karanai (picture from 2017, courtesy: Frontline)

All round the year, the right to observe and celebrate the dates in the Ambedkar calendar have each got their histories of struggle. Each such act is an act of performing equality. It is not mere coincidence that the SC/ST Prevention of Atrocities Act of 1989 was passed on the eve of Ambedkar’s birth centenary in 1990–91. The rise of dalit resistance and awareness led to a spike in atrocities. This period also witnessed the simultaneous fallouts of the Mandal Commission and the Ramjanmabhoomi-driven Hindutva movement that is now flailing in its danse macabre. 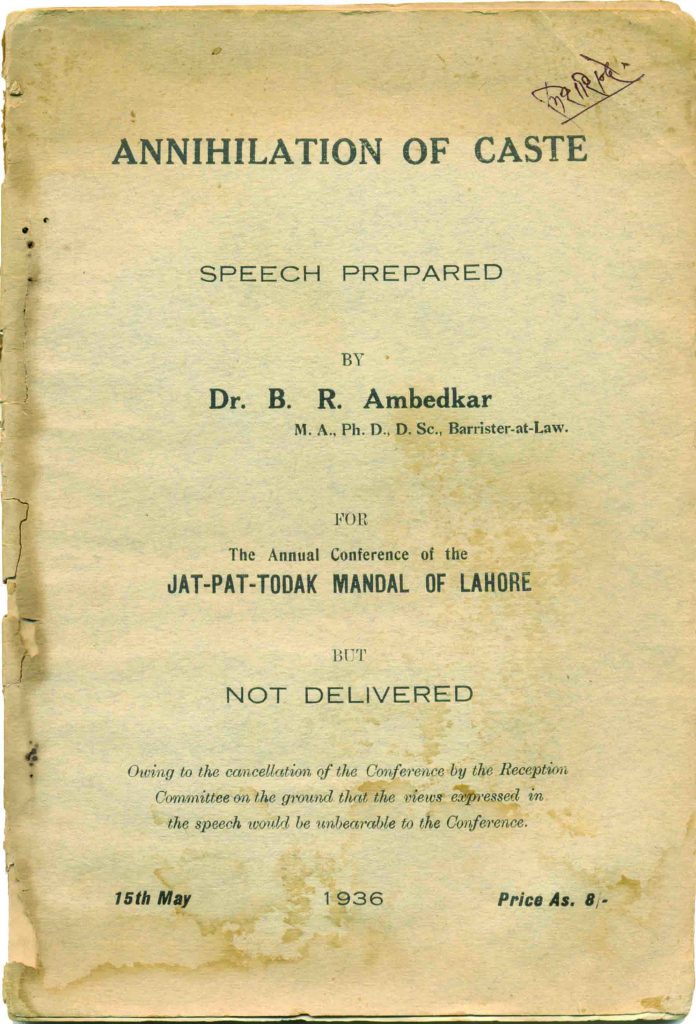 During the end of times we must write history anew. Tell stories that only pass around in whispers. How about the history and fate of the first ever case filed under the SC/ST Act in India? What could be the history of gaana music in North Madras up to the rapper Arivu and The Casteless Collective? In which Indian university was Annihilation of Caste first taught as part of the syllabus? (Where was it first taught even if it was not in syllabus?) What is the history of the Ambedkar Students Association in the University of Hyderabad, and what is the history of beef stalls on the campus? We need histories of printed documents, letters, petitions, pamphlets, posters; we need oral histories. What about the testimonies of all the men and women who are now in their 80s and had converted with Babasaheb in 1956?

There is no end to thinking of how the gaps in history and the space between stars are always bigger than what they appear to be. In his preface to The Untouchables: Who Were They and Why They Became Untouchables?, Ambedkar says:

The present attempt to explain the origin of Untouchability is not the same as writing history from texts which speak with certainty. It is a case of reconstructing history where there are no texts, and if there are, they have no direct bearing on the question.

History is a movement and we are in the middle of it. So this Dalit History Month—that raises a fist to Black History Month—we are inviting our readerly writers to send us well-argued book proposals that aim to tell us the histories we need to know.

Navayana is proud to announce the Navayana Dalit History Fellowship 2021.

Navayana will be funding a minimum of two authors to help them write manuscripts that deal with dalit history. The term ‘dalit history’ can be interpreted with some amount of fluidity—the work has to be nonfictional, have scholarly rigour, but also be suitable for non-specialist adult readers. The work could also be the fruit of research and groundwork that has already been done. Those who are working on translation efforts pertaining to dalit history are also welcome to apply.

Send us your proposals, in English, of not more than 3,000 words, before 31 May 2021. Nothing being really equal in this world, dalit applicants and beef-eaters will be given preference.

Do you have story to tell? Will you rewrite history?

Write to us at: alex@navayana.org with the following subject line <Navayana Dalit History Fellowship 2021>

Click here for the complete Rules and Regulations of the fellowship