The Rupture with Memory

As we walk into another night of the newest phase of imperialism, this book asks: What is the Marxists’ quarrel with Derrida, especially with Specters of Marx? Why do they seem panic-ridden when Derrida seeks to resurrect the ghosts of Marx? Though Derrida moves far beyond what his deconstructive brief would allow him, certain readings view Specters merely as a work of deconstruction/poststructuralism. This, argues Nissim Mannathukkaren, the Marxists can do only at their own peril. Post 9/11, the Marxist project needs to engage more creatively not only with Derrida but also others like Benjamin, Bloch and Marcuse to rebuild strategies to mount a challenge to the evangelical neo-liberal hegemony and to other religious fundamentalisms. The imperative for this should come from the desire to reinstate the ‘romantic’ Marx-who dreamed of the ‘sensuous, the needing, the feeling human being’-into the Marxist oeuvre. Else, the ghosts of Derrida and others shall come to haunt Marxists. 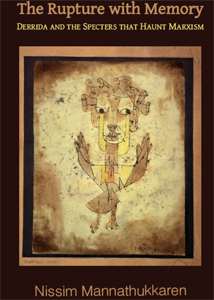