This book is about life in the inner-city areas of Kolkata’s mainly Muslim settlements. It asks a simple question—how do the vast majority of Muslims, especially the poor, live, work, love and die? In the context of the communalisation of urban poverty, People Without History pays attention to the fabric of daily life in Muslim communities—the pursuit of gainful occupation, affective and social affinities, networks of kinship and neighbourhood.
Jeremy Seabrook and Imran Ahmed Siddiqui examine another crucial question. Kolkata’s Muslims live in a city that for 33 years was governed by the Communist Party of India (Marxist). It has been the proudest boast of the Communists that they have been guided by a secular ideology, and that, as a result, Muslims in West Bengal have been spared the excesses of communalists in Gujarat, Maharashtra, Orissa and elsewhere. How far this claim is justified may be judged from the testimonies of the people in this book. 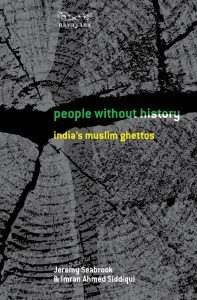 In the poor Muslim bustis of Kolkata, where ‘India Shining’ remains a cruel mirage, and ‘Communism’ equals urban renewal, Seabrook and Siddiqui chronicle dreams betrayed by history. In the most profound sense, this book is a voyage of solidarity that tells truth to the lies of globalization and Islamophobia.—Mike Davis, author of Planet of Slums