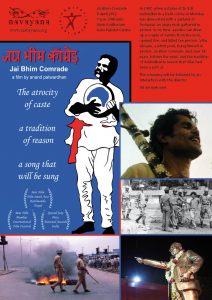 In 1997, when a statue of Dr B.R. Ambedkar in a Dalit colony in Mumbai was desecrated with a garland of footwear, an angry mob gathered in protest. In no time, a police van drew up a couple of metres from the mob, opened fire, and killed ten persons. Vilas Ghogre, a leftist poet, hung himself in protest.
Jai Bhim Comrade, shot over 14 years, follows the music and the tradition of Ambedkarite reason that Vilas had been a part of.

The screening will be followed by an interaction with the director.

Entry free. All are welcome.

JBC is the Winner of the Best Film award at the Mumbai International Film Festival 2011 and Special Jury Award at the National Festival. It also won the best film at Film South Asia, Kathmandu.

Anand Patwardhan is one of India’s most well known documentary filmmakers. For more see www.patwardhan.com