Ambedkar and Other Immortals: An Untouchable Research Programme

With Ambedkar and Other Immortals, Soumyabrata Choudhury produces urgent interpretive realignments which provoke in us the capacity to receive a new, vital wound of thinking: the wound of Ambedkar-thought. Like Althusser marked a philosophical return to Marx, and Lacan to Freud, Choudhury ‘returns’ to Ambedkar guided by Alain Badiou’s philosophical system.

Ambedkar, the activist and politician, is upheld as a thinker with supreme fidelity to the “norm of equality”, a figure in a long line of immortals from Pericles and Abbé Sieyès to Toussaint L’Ouverture. This wager on equality is undeterred by its absence on the ground. Recognising the universal logic of subjugation then opens up the space for a universal articulation for emancipation.

Soumyabrata Choudhury is Associate Professor at the School of Arts and Aesthetics, Jawaharlal Nehru University. He has authored Theatre, Number, Event: Three Studies on the Relationship between Sovereignty, Power and Truth, and articles on ancient Greek liturgy, the staging of Ibsen, psychoanalysis, Nietzsche, Schiller and Hegel. His latest book is Now It’s Come To Distances: Notes on Coronavirus and Shaheen Bagh, Association and Isolation.

Lecture delivered at JNU on 13th April 2018 during the launch of the book:

What is most interesting about this difficult but beautiful book is that it is committed to the task of exposing the naked antagonisms that snake across the cracked surfaces of these oppressive structures. —Scroll.in

Nowadays when Ambedkar scholarship has become an industry, Choudhury’s thesis approaches him from an entirely new perspective.—The Telegraph

The challenge of this book lies in the fact that it provokes us to confront the question of continuity and sustenance of revolutionary ideas without recourse to projects of memory, which requires an endless investment in the past—Cultural Critique 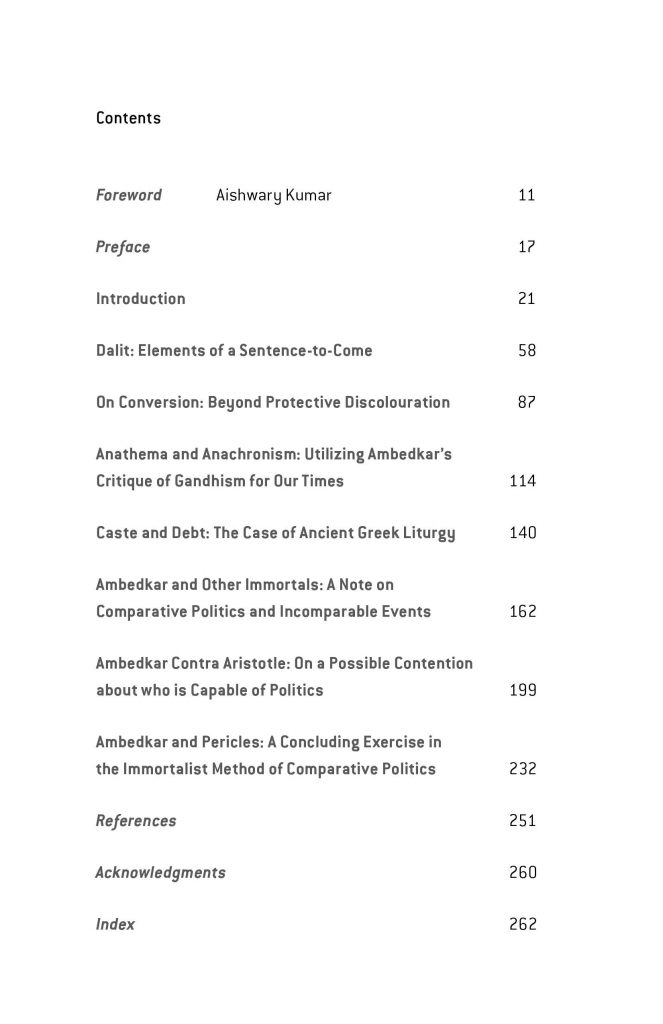 ‘I cannot praise this project enough… it breaks out of the confines of the ‘East–West’ dichotomy by placing Ambedkar in series with Pericles, Aristotle, Abbé Sieyès and others, as an exemplar of radical egalitarian logic’—Slavoj Žižek

‘A reading that shrinks the dark shadow of academic brahminism... In retracing the probing diagonals and analytical arrows of Ambedkar’s insurrections, Ambedkar and Other Immortals has achieved what few before it have’—Aishwary Kumar, in his Foreword